The Koch Brothers Launch A Surrogate War Against Pope Francis 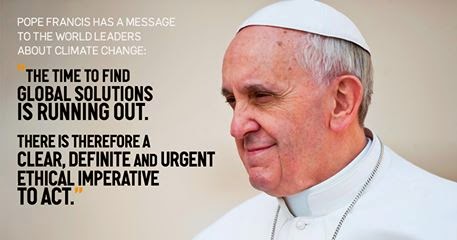 I remain skeptical as to whether Pope Francis can bring modernization and change to the Roman Catholic Church.  Meanwhile, however, Francis continues to make statements that cause Republicans set on creating a new Gilded Age and vulture capitalists cringe.  And rightly so since the GOP agenda is the 180 degree opposite of the Gospel message.  Now, the Koch brothers - who personify  Republican greed and contempt for the less fortunate - are reportedly waging a war against Francis.  Here are highlights from Politicususa.com:

One of the greatest things to happen over the past year is the remarkable revelation that there is finally, at long last, a major Christian leader, and member of the clergy, who espouses, embraces, and promotes the teachings of Jesus Christ. Even for an avowed secular humanist, this is a stunning, and welcomed, development if for no other reason than one of the world’s leading religions appears to be adopting Christ’s regard for the world’s poor and downtrodden. Of course, the Catholic Pope has garnered nothing but serious opposition and pushback from America’s evangelical and Catholic Republican movement, and now the Koch brothers and their dirty energy cabal have joined what is developing into a dirty oil-evangelical war against Pope Francis.

The Pope already drew the wrath of both evangelical and Catholic Republicans in Congress for criticizing the greed and income inequality championed by the GOP, but now he has the undivided attention of the Koch brothers, Exxon, and their dirty energy cohorts. The cause célèbre for the Koch-funded evangelical movement is the Pope’s recent announcement that it is beyond high time for the world, and “all Catholics” to join the fight to reduce the existential threat to human beings from anthropogenic climate change.

"Climate change, the loss of biodiversity and deforestation are already showing their devastating effects in the great cataclysms we witness.”

Those words, although accurate, were toxic to a Koch-funded evangelical Christian group made up of pastors and Christian leaders, the Cornwall Alliance, that considers the devastating effects and great cataclysms we witness from the effects of anthropogenic (manmade) climate change the will of almighty god and biblical. A godly will that no man, much less the Vicar of Christ, dares speak out against or attempt to change.

The Cornwall Alliance was quick to lash out at the Pope this week when he announced he would be issuing a “rare encyclical on the environment and climate change” early this year, as well as convene a summit of the world’s religious leaders to address climate change. Pope Francis will also address the United Nations General Assembly with a view toward influencing the upcoming U.N. meeting on climate change in Paris this year.

The Koch-funded “Cornwall Alliance for the Stewardship of Creation” had previously issued a biblical declaration labeling the American environmental movement a dirty false religion and “unbiblical.”

[Cornwall Alliance spokesman] Beisner also warned the Pope that he had better “back off” talking about combating climate change saying that although “The Catholic church is correct on ethical principles, it has been misled on science. It follows that the policies the Vatican is promoting are incorrect. Our position reflects the views of millions of evangelical Christians in the US” as well as the Koch brothers who fund the Cornwall Alliance.

The only “ethical principle evangelicals agree with Catholic doctrine on is controlling women by banning all forms of “unnatural birth control.” Other than that one abominable concurrence, this new Pope’s adherence to the biblical Jesus Christ’s teachings that “millions of evangelical Christians” reject is a major source of angst and ire to Republicans, the religious right, and their funding machine the Koch brothers. That the Pope embraces the obvious science and empirical truth about anthropogenic climate change, and is joining the battle to assuage its destruction, is why the Kochs and their dirty energy cabal are funding the evangelical war against the Pope; to perpetuate the damage from climate change and their ungodly profits.

According to Cornwall’s pastors and Christian leaders, the Kochs’ oil industry campaign against efforts to combat climate change is the evangelical movement’s  “biblical response to one of the greatest deceptions of our day” against what they have labeled “a false religion.” The group claims the entire climate change movement is a “nefarious conspiracy to empower eugenicists and create a global government” and portrays even the idea of climate change as the work of Satan the Devil.

The relationship between the Kochs and Cornwall is symbiotic in that the Kochs get a ready-made batch of religious sycophants dedicated to supporting the destruction of the environment to hasten the onset of their cherished end time “rapture,” and the Cornwall Alliance evangelical pastors and leaders get an endless supply of Koch, Exxon, and oil industry cash.