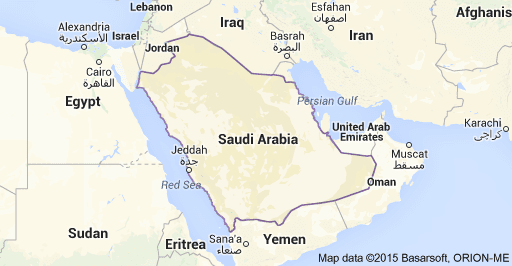 The ruling monarchy in Saudi Arabia has long supported one of the more extreme forms of Islam - regardless of the behavior of members of the royal family outside of public view - and many Islamic fundamentalist groups have found funding in the kingdom.  Now, the support of a virulent form of Islam may be about to come back and bite the nation in the ass as ISIS militants launched an attack on the border with Iraq and statements have been released that ISIS wants to conquer the kingdom.  Karma can indeed be a bitch.  A piece in the  International Business Times looks at the story.  Here are excerpts:


For the first time since the Islamic State group formally announced its desire to conquer the Kingdom of Saudi Arabia last month, government officials claimed that “terrorist elements” launched an attack on the Saudi border with Iraq. Four militants, one wearing a suicide vest, attacked a border fortification on Monday, killing three Saudi border guards.

The militants' official media wing for Iraq’s Anbar province published a photo essay taking responsibility for the attack, which is the closest ISIS has come to breaching the coveted Saudi Arabian border since it declared the exsitence of a "caliphate" in June. The suicide attack signals a change in the group’s strategy to conquer the kingdom. It was both the first direct attack on Saudi’s armed forces and the first documented attempt from the militant group to infiltrate the country.

Despite the government's past efforts to quell extremism, Saudi has become increasing vulnerable to ISIS advances.

Saudi Arabia is an active member of the U.S.-led anti-ISIS coalition and a longtime U.S. ally. The kingdom is also the largest producer and exporter of oil and the region’s Sunni powerhouse, making it a triple prize for ISIS and an essential part of its plans to expand the so-called caliphate.

Monday’s attack hit the Northern Border patrol at al-Suwaif near the city of Arar, according to The Guardian. Arar is more than 700 miles (1,200 km) from the capital Riyadh but territory between the two is not densely populated, and militants may have little opposition if they were able to cross the border and advance toward the capital through open desert.

[T]he militant group’s ideology had already succeeded in infiltrating Saudi Arabia to an extent.  Last month, ISIS claimed responsibility for killing a Danish national in the country and, in a separate incident, security forces arrested around 100 suspected ISIS militants accused of carrying out a November attack on the Saudi Shiite community in al-Ahsa. These attacks were likely carried out by ISIS sympathizers already in Saudi, who were heeding ISIS leader Abu Bakr al-Baghdadi’s call to attack Saudi citizens and "embitter their lives and make them occupied with themselves instead of us."

Whether the recent attack was a result of direct orders from Baghdadi or of a lone-wolf group of ISIS sympathizers, the threat to Saudi Arabia remains strong.

Religious extremism of all stripes remains a scourge on humanity.  A world free of religion would be a better place.
Posted by Michael-in-Norfolk at Tuesday, January 06, 2015