Where Imprisonment or Death For Blasphemy Is The Norm 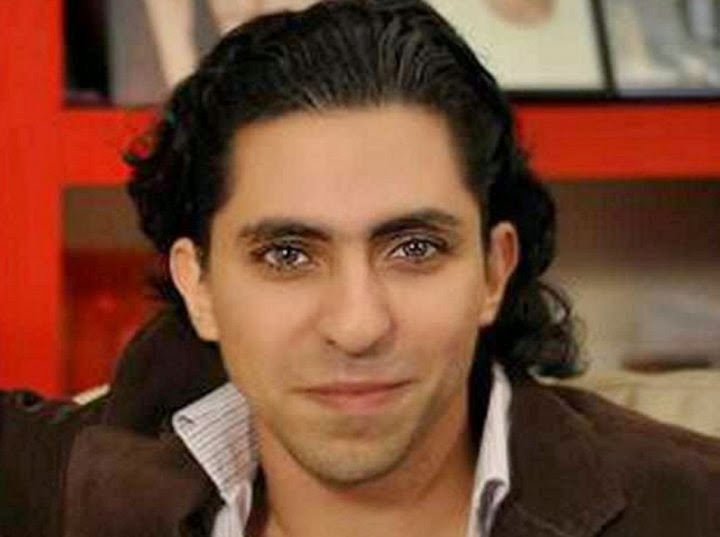 As people continue to feel revulsion over the murders in Paris motivated by Islamic extremism and , in the case of the victims at Charlie Hebdo, sick outrage for perceived blasphemy, many are missing the point that the laws in far too many countries make blasphemy a crime and in some instances, a capital offense.   Such laws make the murders in Paris "justified" in the minds of religious extremists.  Equally disturbing is the fact that a number of the countries enforcing such laws are U.S. allies and/or recipients of large amounts of U.S. aid.  Thus, the U.S. needs to be demanding that such laws be eliminated and those imprisoned for blasphemy be released.  A prime example is the plight of Saudi blogger Raif Badawi, age 30 (pictured above), sentenced to 1,000 lashes and ten (10) years in prison.  Why the Hell is America supporting such a foul regime?  In a word, oil.  In short, America is only too ready to prostitute its values.   Al-akhbar.com has details:

Badawi, 30, was arrested in June 2012 and charged with offenses ranging from cyber crime to disobeying his father and apostasy, or abandoning his faith.

He was sentenced to 10 years in prison, a fine of 1 million Saudi riyals ($266,666) and 1,000 lashes last year after prosecutors challenged an earlier sentence of seven years and 600 lashes as being too lenient.

Witnesses said that Badawi was flogged after the weekly Friday prayers near Al-Jafali mosque as a crowd of worshipers looked on.

Badawi was driven to the site in a police car, and taken out of the vehicle as a government employee read out the charges against him to the crowd.

The blogger was made to stand with his back to onlookers as another man began flogging him, witnesses said, adding that Badawi did not make any sound or cry in pain.

The faithful who had emerged from noon prayers watched in silence and were ordered by security forces not to take any pictures on their mobile phones.

"Although Saudi Arabia condemned yesterday's cowardly attack on the French satirical magazine Charlie Hebdo, it is now preparing to inflict the most barbaric punishment on a citizen who just used his freedom of expression and information," Reporters Without Borders program director Lucie Morillon said Thursday.

Badawi, who has been in jail since 2012, is a "prisoner of conscience", said London-based Amnesty International, demanding his release.

Badawi is the co-founder of the Saudi Liberal Network along with women's rights campaigner Suad al-Shammari, who was arrested last October and also accused of "insulting Islam."

"Flogging and other forms of corporal punishment are prohibited under international law, which prohibits torture and other cruel, inhuman or degrading treatment or punishment," said Amnesty's Philip Luther.

Saudi Arabia's legal code follows a medieval version of Sharia law. Judges are trained as religious scholars and have a broad scope to base verdicts and sentences on their own interpretation of religious texts.

But the problem extends far beyond Saudi Arabia.  Here are highlights from an article in Slate that looks at government sanctioned murder or imprisonment for blasphemy:

The Charlie Hebdo attack in Paris this week was uniquely horrific. But in one way, it was not that unusual: Violent acts in response to “blasphemy” are unfortunately pretty common. They’re just usually perpetrated by governments.

In a recent essay in Foreign Affairs, UCLA law professor Amjad Mahmood Khan argues that Pakistan’s absurdly broad blasphemy laws—under which any “imputation, innuendo, or insinuation” that “directly or indirectly defiles the sacred name of Prophet Muhammad” is outlawed and in some cases punishable by death—have not only led to the arrest of thousands of individuals for crimes as trivial as wearing an Islamic slogan on a T-shirt, but “provide legal cover for terrorists to commit atrocities in the name of protecting Islam’s integrity based on their warped view of the faith.” This includes the mass killings of members of minority sects like the Ahmadis, who are forbidden by law from calling themselves Muslims and frequently charged under blasphemy laws, as well as attacks on Christians.

Blasphemy laws are harshest and most common in the Muslim world, but aren’t exclusive to it. In the wake of Pussy Riot’s church performance, Russia’s parliament passed a new law mandating jail terms for insults to religion. Nearly a quarter of the world’s countries have blasphemy laws on their books, according to Pew, and one out of 10 bans apostasy. The Charlie Hebdo killings have already prompted some Western governments, notably Ireland and Canada, to announce that they will reconsider the blasphemy laws on their books. But in much of the world, governments, not terrorists, will continue to be the biggest threat to freedom of and from religion.

In the movie "Latter Days" a character asks the Mormon missionaries the following question: "How come if God talks to Joseph Smith, Smith gets to be a prophet, but if God talks to me, I'm a schizophrenic?"   Sadly, the same question applies to the Quran and Muhammad who wrote it based on claimed verbal communications through the angel Gabriel.  Was Muhammad truly a prophet or merely a schizophrenic con man?  I suspect readers know my answer.

Posted by Michael-in-Norfolk at Saturday, January 10, 2015