Scaremongering Begins Ahead of Ireland Vote on Marriage Equality 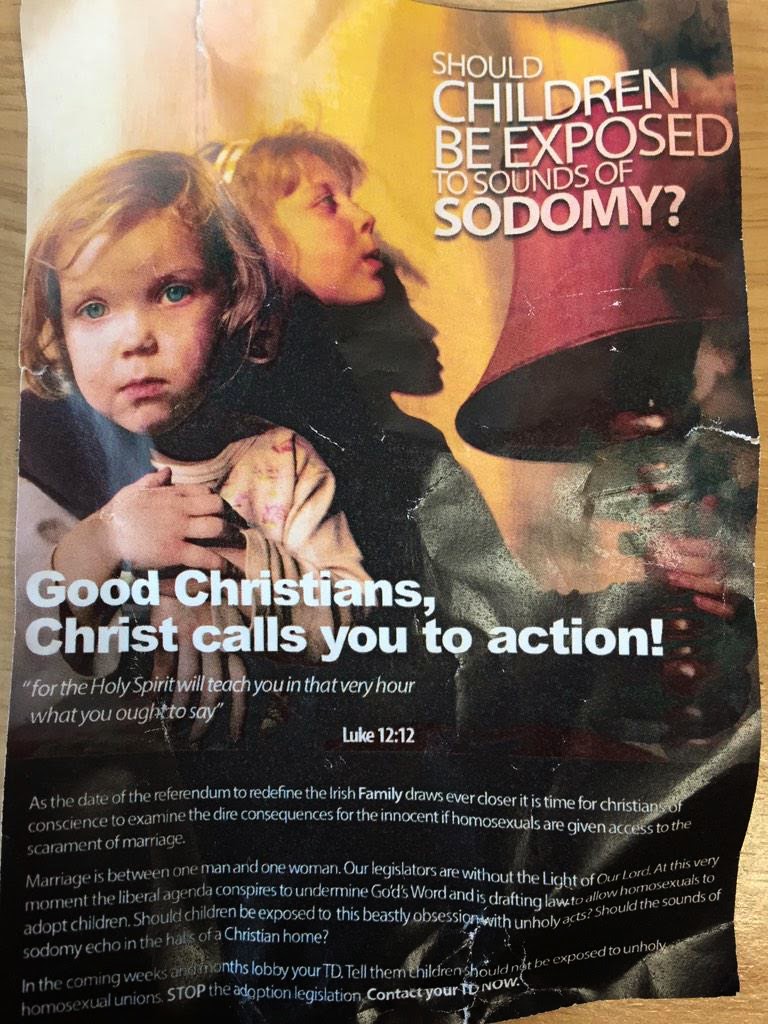 Christian elements in Ireland - using that term loosely, especially in regard to the morally bankrupt  Catholic Church - have begun a scaremongering campaign in advance of the vote in May that would legalize same sex marriage in the former bastion of Catholicism.  Among the slogans being used is "Should children be exposed to the sound of sodomy" (I'm not sure what those sounds might be) and other phrases denigrating gays and depicting gays as child predators.  Gay Star News looks at the anti-gay effort to impose one set of religious belief on all citizens.  Here are highlights:

With a referendum due in Ireland in May on the issue of same-sex marriage, campaigning between opposing factions is intensifying.

Although early opinion polls estimated that 70% of the country supported equal marriage, in the last fortnight, several Government politicians have said that the vote could me much closer than previously anticipated, and that LGBT campaigners cannot afford to be complacent.

Now, in a controversial twist that has set Twitter alight, a Christian group has found itself widely mocked for producing pamphlets encouraging people to vote against same-sex marriage.

Why? Because, according to the group’s literature, children must be protected from ‘the sounds of sodomy’.

In the pamphlet, titled ‘Should children be exposed to the sounds of sodomy?’, the group says that, ‘it’s time for Christians of conscience to examine the dire consequences for the innocent if homosexuals are given access to the sacrament of marriage.’

Should children be exposed to this beastly obsession with unholy acts? Should the sounds of sodomy echo in the halls of a Christian home?’

The leaflets were reportedly handed out yesterday in Dublin. . . . the pamphlet elicited a huge backlash on social . . .

Can't you feel the "Christian love"?   I'd say that children are better off hearing the sound of sodomy than being indoctrinated with the hate, bigotry and ignorance that passes for Christian belief.
Posted by Michael-in-Norfolk at Wednesday, January 07, 2015