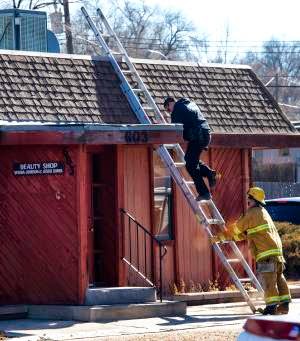 Lost in the coverage of the Paris massacre and the search for the lost AirAsia flight is the bombing of a NAACP office in Boulder, Colorado.  Fortunately, no one was killed or seriously injured, but the act shows the same kind of hate and contempt for others that underlie the Paris attack.  With white supremacists increasingly welcomed with open arms in today's Republican Party, one has to wonder if the person(s) behind the bombing felt emboldened.  Moreover, I cannot help but wonder if the perpetrator(s) claim to be "godly Christian(s)" like so many of the segregationists of the past.  Think Progress has details on the bombing.  Here are highlights:

In what appears to be an attack on a well-known civil rights organization, an “improvised explosive device” detonated on Tuesday at the headquarters of the Colorado Springs, Colorado NAACP, according to a statement by the FBI. No one was killed or injured in the explosion, and there was “only minimal surface charring to the exterior wall of the building,” which also includes a hair salon.

The explosion could have been much worse, however, as the explosive device was placed next to a gasoline can in an apparent attempt to increase the force of the explosion. The gasoline did not ignite.

The FBI statement adds that a “potential person of interest in this investigation is a Caucasian male, approximately 40 years of age, and balding. He may be driving a 2000 or older model dirty, white pick-up truck with paneling, a dark colored bed liner, open tailgate, and a missing or covered license plate.”

Although the apparent bomber’s motives are not yet known, bombings were a common terrorist tactic during the Jim Crow era.


According to The Gazette, the chapter remains undeterred:

[Henry] Allen [president of the chapter] said he is hesitant to call the explosion a hate crime without further information from the FBI and other law enforcement agencies investigating but said the organization "will not be deterred."

Posted by Michael-in-Norfolk at Thursday, January 08, 2015