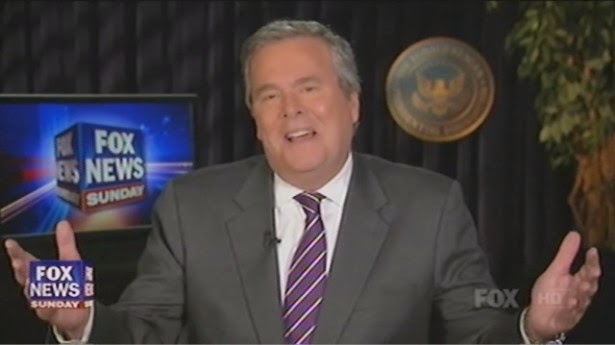 Has Jeb Bush "evolved" on gays rights?  Not that I can discern.  As noted in a prior post, in the face of same sex marriage becoming legal in Florida, Bush stated that tired old state's rights mantra that marriage should be determined by the states.  Now, BuzzFeed has unearthed statements made by Bush in the past that are ever more strident in their condemnation of gays and gay rights and, true to form, make references to sodomy.  Will Bush repudiate his prior statements?  Don't hold your breath as Bush seeks to court the anti-gay Christofascists in the GOP.  He seemingly has learned nothing from Mitt Romney's losses in the Electoral College where LGBT votes tipped some key states to the Democrat column (some statistics suggest that Virginia was one of these states).  Here are highlights from BuzzFeed and excerpts from a opinion piece by Bush published in the Miami Herald:

Jeb Bush has said gay couples shouldn’t be “discriminated against.” He has argued that same-sex parents who “love their children with all their heart and soul” are “examples to others.” And he has warned that the Republican Party, whose nomination he may seek next year, is too often labeled “anti-gay.”

But Bush’s recent, somewhat sympathetic language about LGBT rights provides a marked contrast to his early comments on the issue — more in rhetoric than policy.

During his first and unsuccessful bid for governor in 1994, Bush argued in an editorial that LGBT people do not deserve special legal protection. “We have enough special categories, enough victims, without creating even more,” he wrote.

In the editorial, published in the Miami Herald that summer, Bush drew a parallel between legal protection for gays and the question, “[Should] sodomy be elevated to the same constitutional status as race and religion? My answer is No.”

“The only thing that seems to have changed is his tone,” said Nadine Smith, the executive director of Equality Florida, a leading LGBT rights group in the state.  Smith, a longtime activist in Florida, has followed Bush’s stance on LGBT policy closely since his first run for governor. She recalled a 1994 ballot measure he supported that sought to ban state laws protecting gays from discrimination.

During his two terms as governor, from 1999 to 2007, Bush maintained his views on same-sex marriage. Ahead of a 2008 campaign for a constitutional ban on same-sex marriage in Florida — already illegal in the state at the time — Bush initially maintained that such a proposal would be unnecessary. He later backed the ban.

[Highlights of ]The full text of Bush’s 1994 editorial reads as follows:

Homosexuality is wrong, but it is also wrong to discriminate against homosexuals in employment, housing, etc., solely on the basis of sexual preference. I have employed homosexuals and continue to do so. Therefore, I take vigorous exception to your characterization of me as a bigot.

I do not believe that government should create a new class of citizens with special legal rights.

[S]hould sodomy be elevated to the same constitutional status as race and religion? My answer is No. We have enough special categories, enough victims, without creating even more.

Bush definitely will never get my vote!
Posted by Michael-in-Norfolk at Tuesday, January 06, 2015