Catholic Archdiocese Proves Itself an Enemy of Gay Rights 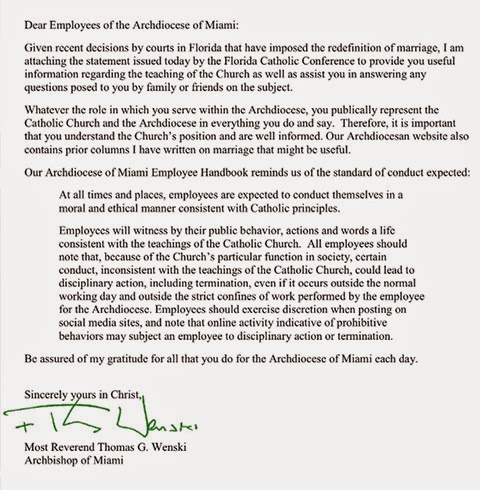 Not being content to officially bemoan the legalization of same sex marriage in Florida, the Archdiocese of Miami via a letter (see image above) has informed the employees of all Church affiliated institutions and organizations that they will be fired if they take any position that isn't condemning gay marriage and gay rights, including making pro-gay comments on Facebook and other social media websites.  Would that the Church had exhibited such diligence and zero tolerance in monitoring priest sexually molesting children and youths.  There is obviously to be no freedom of conscience in the archdiocese.  Hopefully, with time, more individuals will vote with their feet and leave the Church.  Here are highlights from NBC News:

The Archdiocese of Miami is warning employees that they could be fired for any conduct that is “inconsistent with the teachings of the Catholic Church" in the wake of the start of same-sex marriages in Florida.

The letter, from Archbishop Thomas Wenski, told employees that "because of the Church’s particular function in society, certain conduct, inconsistent with the teachings of the Catholic Church, could lead to disciplinary action, including termination, even if it occurs outside the normal working day and outside the strict confines of work performed by the employee for the Archdiocese.”

Wenski’s letter also warned employees that the conduct requirements also extend to the Internet. “Employees should exercise discretion when posting on social media sites, and note that online activity indicative of prohibitive behaviors may subject an employee to disciplinary action or termination," it read.

Wenski was critical of the move by the judicial system to overturn the gay marriage ban, telling NBC 6 that “by imposing a new definition of marriage on the people of Florida, the courts are changing what marriage means for everybody.”

So, posting pro-gay marriage comments on Facebook can get one fired, but molesting children and bishops and cardinals covering up and abetting predatory priests is seemingly "consistent with the teachings of the Catholic Church"?
Posted by Michael-in-Norfolk at Wednesday, January 07, 2015