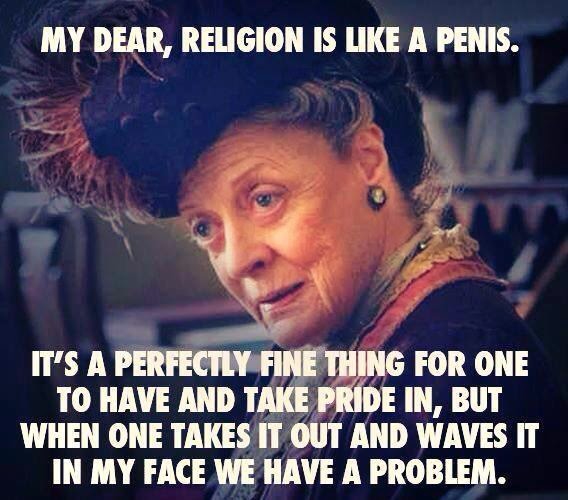 I don't deny that I am a critic of religion - especially fundamentalist religion - because it stifles thought and reason and inflicts so much misery and anguish on so many and causes so much psychological harm.  The recent suicide of Leelah Alcorn and the rejection she received from her religious "Christian" parents is but one of countless examples of the evils done by religion. Then, of course we have ISIS and the horrors being done in the name of conservative Islam.  Throughout the centuries, religion has brought so much death and destruction.  Now, faced with growing global challenges, religion encourages the embrace of ignorance and a refusal to deal with issues ranging from climate change, to LGBT discrimination, and the unequal treatment of women.  A piece in Salon looks at this fight for reason against the celebratory embrace of ignorance and those who continue to defend religion.  Here are excerpts:

I would like to thank Reza Aslan.  In his recent Salon rebuttal to denunciations (including mine) of religion put forward by people the media has come to call New Atheists, he resurrects a word the late Christopher Hitchens, now three years departed, used to describe himself: antitheist.  (Aslan even provides the link to a relevant Hitchens text from long ago that is well worth reading.)  Antitheists hold that the portrayal of our world and humankind’s place in it as set out in the foundational texts of the three Abrahamic religions constitutes, to quote Hitchens, “a sinister fairy tale,” and that “life would be miserable if what the faithful affirmed was actually the case.”  The reason?  “[T]here may be people,” he wrote, “who wish to live their lives under a cradle-to-grave divine supervision; a permanent surveillance and [around the clock] monitoring [a celestial North Korea],” but he certainly did not.  The eternally repressive alternate reality concocted by the religious of eons past, if true, would be, in his words, “horrible” and “grotesque.”

I have never envied people of faith their worldview, never esteemed the ability to consider something true without evidence, never respected as morally superior those who manage this feat of credulity and illogicality.

Aslan is hoping to discredit and classify into irrelevance those who publicly insist, as I have (and he quotes me), that religion is “innately backward, obscurantist, irrational and dangerous.”  Backward, because it relies not on reason for solutions, but on looking to ancient texts for ready-made answers.  Obscurantist, because it discourages searching for truthes about our world using empirical methods.  Irrational, because (for starters) the very notion that this or that shepherd or merchant ages ago was chosen by a divine being to deliver a message valid eternally and for all humanity offends reason and commonsense.  Dangerous, because (again, just for starters), armed with “holy” texts, the faithful practice all sorts of mischief and savagery, damaging both members of their own communities and those outside them.

There can be only one reason that Aslan adduces his taxonomy of nonbelievers: to confuse the argument, this time by claiming that atheists (or antitheists) are busy propagating a fundamentalism of their own . . . .

[I]t wasn’t “atheism that motivated Stalin and Mao to demolish or expropriate houses of worship, to slaughter tens of thousands of priests, nuns and monks.  It was anti-theism that motivated them to do so.” . . . . Militantly atheist, the communist governments of the two countries opposed religion because it rivaled the all-encompassing state ideology they were bent on inculcating in their subjects.  This was particularly true in the case of Russia, where the tsar had claimed a divine right to the throne and ruled as God’s viceroy on earth, and the Russian Orthodox Church functioned as an arm of the state. . . . . both Russia and China aimed to break resistance to their versions of Marxism, with the goal of establishing dictatorial temporal power.

Rationalists . . . . . are assertively making their case because religion, since the Reagan years, has been abandoning the realm of private conscience (where it has every right to be) and intruding itself into national life, with politicians and public figures flaunting their belief, advocating and (passing) legislation that restricts women’s reproductive rights, attempting to impose preposterous fairy tales (think intelligent design) on defenseless children in science classes, and even, in the case of Texas, recasting the Constitution in school textbooks as a document inspired by the Bible.  Abroad, militants pursuing Islamist agendas have been raining death and destruction on entire populations . . . .

No one who cares about our future can quietly abide the continuing propagation and influence of apocalyptic fables that large numbers of people take seriously and not raise a loud, persistent, even strident cry of alarm.

Nonbelievers reject the comic-book cosmogony propounded as “sacred truth” by Judaism, Christianity, and Islam – “sacred truth” far too many in the present day are eager to die, mutilate, and kill for.  We ask, quite rightly, how reasonable people could believe it.  We dismiss as incompatible with modern life the master-slave ethos, the affirmation of slavery as an institution, the patriarchal misogyny, the wanton punitive cruelty (check out Leviticus, for example), the vile stigmatization of gays, and the shaming of the female body that permeate the religious dogma and its canon.

More than two centuries ago, the English and American revolutionary Thomas Paine penned words that still ring true: “All national institutions of churches, whether Jewish, Christian or Turkish, appear to me no other than human inventions, set up to terrify and enslave mankind, and monopolize power and profit.”

[N]onbelievers have taken to reacting vociferously against attempts of the past decades to drag us all, in the name of faith and our own good, away from secularism and the Enlightenment, and back toward a more primitive age.

Benjamin Franklin once observed that, “The way to see by Faith is to shut the eye of Reason.”  We all have a choice to make – with both eyes open.

If you don't believe the auther, contemplate the policies that Republican lunatics such as Mike Huckabee - who has left Fox News for a possible presidential run - and Rick Santorum or the folks at The Family Foundation would inflict on all Americans.   These people belong in asylums, not in positions seeking to influence public policies and laws.