Is It Child Abuse to Make a LGBT Child ‘Change’? 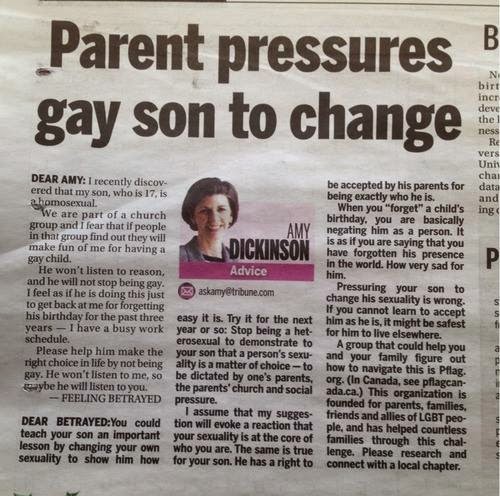 The suicide of Leelah Alcorn has set off a much needed debate on whether efforts to change LGBT children - especially those transgender - is a form of child abuse.  I've made it clear that my answer to that question is a resounding yes.   The New York Times has a debate going amongst writers that looks at the issue and so far, the opinions side with seeing such change attempts as abuse and seek to limit parental control over children.  Here are highlights from one of the opinions:

L.G.B.T. youth need support from their families -- not derision. If you tell a child or teenager they’re not good enough, that they’re worthless, that who they are is broken or wrong, that’s abuse. So-called conversion therapy -- ideologically based counseling that teaches L.G.B.T people they can be “fixed” to be straight or cisgender -- is no different. I don't know the details of Leelah Alcorn's therapy or what her home life was like beyond what her online notes describe -- but forcing L.G.B.T children to attend counseling that tells them that who they are is shameful or "sick" is child abuse.

This kind of counseling -- which has been derided by the World Health Organization, the American Psychological Association and the American Medical Association -- is illegal in multiple states for a reason: it’s wrong, it’s harmful and it actively puts young lives at risk.

Trans youth -- who suffer from high suicide and suicide attempt rates -- are even more likely to make attempts on their lives when they have unsupportive or abusive families. This is not a matter of rhetoric or legalese, it’s an urgent issue of life and death.

Leelah Alcorn did not have to die. There are support structures already in place for young L.G.B.T people -- like PFLAG and the Trevor Project -- to get help with their families or on their own. Now we need more legal options, including easier emancipation for minors, to ensure that young L.G.B.T people facing abuse at home have access to the help they want and need.


Another opinion notes the following which ought to make "Christian counseling" illegal:

Those who received counseling from a religious adviser were actually more likely to have a later suicide attempt than those who sought no help at all.

It is far past time that children cease being treated as chattel property of their parents and that fundamentalist parents who reject their children be charged with abuse and have their parental rights terminated.  No child should have their life ruined or feel driven to suicide merely because their parents are ignorance embracing religious fanatics.
Posted by Michael-in-Norfolk at Friday, January 09, 2015