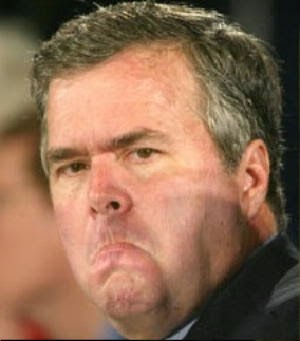 The past week has shown all too clearly the dangers of religious belief and those who think their religious beliefs and sensibilities trump the rights of others.  As evident from numerous posts, I see religion as more often than not as an insidious cancer that harms more than it provides benefit.  Yet, despite the evils done in the name of religion, we continue to see undeserved deference and respect given to religion and believers no matter how ignorance embracing and, worse yet, we see laws against blasphemy - the subject for another post - that prevent one from exercising free speech and speaking the truth about the idiocy and ignorance of religious traditions and figures.  Joining the list of Republican politicians who prostitute themselves to the pious is Jeb Bush, a presumed GOP 2016 presidential candidate, who seeks to use the smoke screen of "religious liberty" as justification for discrimination against and the denial of civil rights to LGBT citizens.  Michelangelo Signorile has a wonderful take down of Bush at Huffington Post.  Here are excerpts:

Once again many in the media have fallen for GOP strategists' attempts to make a candidate seem moderate -- "soften" and "softening" seem to be the words of choice for CNN and others -- while he's not changed his hardcore right-wing position at all.

Here's what happened: Jeb Bush was playing golf on Sunday while the earth in Florida shifted beneath him. Judges had been hearing desperate last-minute arguments and handing down rulings as Florida's gay marriage ban was on its last leg, and Florida, within 24 hours, would see its first gay and lesbian couples marrying, another tipping point in the national movement.

The Miami Herald caught Bush off guard as he came off the Coral Gables course, and -- in an example of how he is not ready for prime time, since a would-be presidential candidate should have had a plan -- Bush gave an old, tired answer that doesn't work anymore, and also seemed a bit confused: "It ought to be a local decision. I mean, a state decision. The state decided. The people of the state decided. But it's been overturned by the courts, I guess."

[W]hat transpired after that was probably a lot of frantic phone calls with GOP strategists, and by midday Monday Bush pressed reset and sent out a polished-up 2015 line that seeks to appeal to bigots in code words while seeming like he's "softening" -- or at least, it could be peddled that way to the media -- on an issue about which he's out of step with the majority of Americans. "We live in a democracy, and regardless of our disagreements, we have to respect the rule of law," Bush said in a statement that was put out to the media. "I hope that we can show respect for the good people on all sides of the gay and lesbian marriage issue  -- including couples making lifetime commitments to each other who are seeking greater legal protections and those of us who believe marriage is a sacrament and want to safeguard religious liberty."

In other words, please respect that I and others don't support your civil rights because of our religious beliefs. Sorry, but that doesn't cut it.

Bush's newly-fashioned statement was meant not to scare off younger voters, suburbanites, and some wealthy fiscal conservative donors, while still dog whistling to the Christian right with the "safeguard religious liberty" bit -- three words we will hear ad nauseum in the 2016 presidential race.

Giving any legitimacy to this language by not commenting on it, while the media is already beginning to use it exactly in the way Christian conservatives desire, is flat out dangerous.

Religion, if it belongs anywhere, belongs in the privacy of one's home and in one's house of worship.  It has no place in the civil laws and public policy. None.  Similarly, Bush deserves to hold no public office, least of all the presidency.

Posted by Michael-in-Norfolk at Saturday, January 10, 2015