What Religious Conservatives Really Want Out Of Hobby Lobby 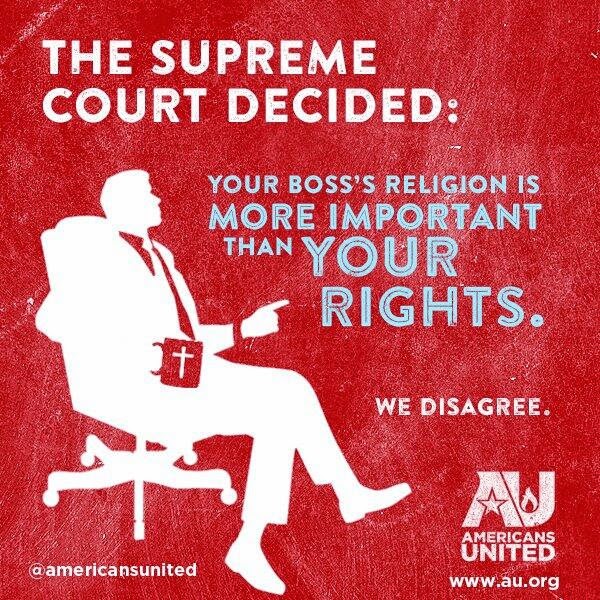 I have noted from time to time that the ultimate objective of the Christofascists is to overturn the U.S. Supreme court ruling in Griswold v. Connecticut which first upheld the right of couples to use contraception and began the line of rulings expanding on citizens' right to privacy.  Some scoff at this assertion, but if one follows the Christofascists' websites and statements, ending contraception and not just abortion is the goal.  In the short term, if the ultimate goal cannot be achieved, the fall back agenda is to limit contraception as much as possible, especially through sabotaging  contraception coverage under the Affordable Health Care Act.  A piece in Think Progress looks at these shorter term efforts.  Here are highlights:

For two and a half years, the Obama Administration has tried to strike a balance between the health needs of workers and the sensibilities of employers who object to contraceptive care on religious grounds. Just last month, the administration announced its most recent accommodation for these religious objectors — an employer can exempt itself completely from the federal rule requiring employer-provided health plans to cover birth control, so long as it informs the government that it seeks a religious exemption and tells them which company administers their health plan.

Yet, according to a court document filed earlier this month by a leading religious conservative litigation shop, even this degree of accommodation is insufficient to satisfy the most vehement objectors to birth control. Indeed, if the courts ultimately accept the arguments presented by this court filing, that would leave the administration largely powerless to ensure that workers whose employers object to birth control still receive contraceptive coverage. The alleged rights of the employer would trump the rights of the employee.

The court filing is a motion filed by the Becket Fund for Religious Liberty — the same Becket Fund that represented Hobby Lobby in its successful lawsuit in the Supreme Court — on behalf of Ave Maria University, a conservative Catholic school which claims that “any action ‘specifically intended to prevent procreation’ — including contraception and sterilization — is morally wrong.”

What’s unusual about this motion, however, is that it specifically denies that the Obama Administration’s latest accommodation for religious objectors is sufficient. “Rather than simply requiring notice that Ave Maria is a religious nonprofit with a religious objection,” the motion complains, “the augmented rule would require Ave Marie [sic] to provide its insurance company’s name and contact information for the specific purpose of allowing HHS to issue a notice requiring the insurer to provide the exact same items through Ave Maria’s healthcare plan as if Ave Maria had given the insurer Form 700 directly.”

Once the government has this form in hand, they would then contact this insurance company and arrange for it to provide contraceptive coverage to the religious objector’s employees without requiring the objector to provide this coverage itself. Notably, the Supreme Court’s opinion in Hobby Lobby strongly suggests that the just-fill-out-this-form accommodation is sufficient to overcome any legal objections to the overall regime for providing birth control to employees.

Nevertheless, several religious employers objected to the fill-out-the-form solution, so the Obama Administration granted them a further accommodation — permitting them to exempt themselves from the birth control rules without having to fill out any particular form at all, so long as the government learns who their insurance administrator is.

Ave Maria’s objection is not exactly surprising, as we explained shortly after the Obama Administration announced its latest accommodation, “employers who have raised the staunchest objections to birth control have often claimed that they cannot take any action that will set in motion a chain of events that leads to someone receiving contraception, as doing so would make them ‘complicit’ in the act of providing birth control,” but their objection is nonetheless significant because it reveals what the stakes actually are in the follow-up cases to Hobby Lobby.