Is ISIS a Faith-Based Terrorist Group? 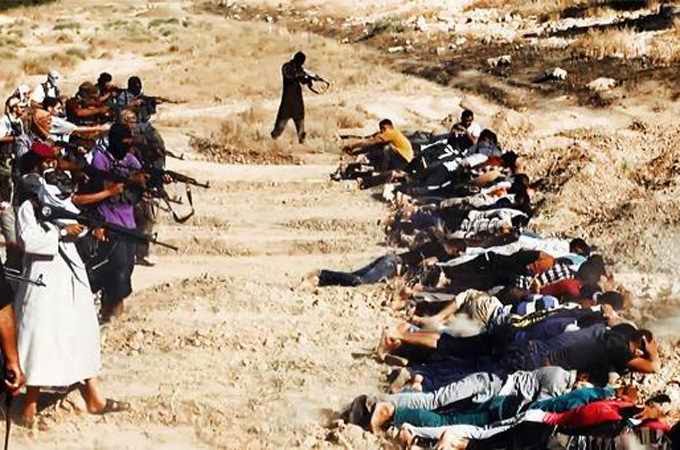 A piece at Columbia Journalism Review looks at a question that can elicit very different answers, namely, whether or not ISIS is a faith-based terrorist group.  Personally, I find myself falling on the side of those who would answer the question in the affirmative.  The rape murder and attempted genocide against those who don't hold to the extreme fundamentalist Islamic beliefs of ISIS is one strong indicator that such is the case.  And, just like far right Christians in America, the followers of ISIS claim to have god on their side even as they commit the most horrific acts.  Far right religious belief seems to always hold that those who believe differently should be stripped of their rights or, worse yet, exterminated.  Sadly, journalist remain too reluctant to call out the evils wrought by religion both in the case of ISIS and home grown Christofascists.  Like the Bible, the Koran has passages that can be used to justify any number of horrors.  The real burden rests on non-extremists of both faiths to stand up to extremists.  Unfortunately, too often they stand by quietly like the "good Germans" who allowed Hitler's rise to power.  Here are highlights from the article:


The idea that the press has not done a good job of explaining the role of religion in Islamic extremism is not by itself controversial. Murtaza Hussain, a writer at The Intercept, spoke for journalists and scholars of otherwise radically divergent worldviews when he told me, “The media doesn’t know how to cover this issue.” But ask those same journalists and scholars why, and in what ways, the media have failed to explain the role that Islamic faith plays in motivating the terrorism committed in its name, and you will get irreconcilable answers.

Some, like Asra Nomani, a former Wall Street Journal reporter, say that a fear of being perceived as anti-Muslim inhibits journalists from linking extremism to the faith. “I believe that since 9/11 the journalism community in the West has been walking on eggshells figuring out how to cover Islam,” she says. But now, due to the heavily covered ascent of the Islamic State in Iraq and Syria (ISIS), she thinks that “people are having to confront this 5,000-pound elephant that’s been sitting in the room—an interpretation of Islam that believes in beheadings, an Islamic state, and an end-times victory of Muslims over the world.”

Others, like Hatem Bazian, a senior lecturer in near Eastern and ethnic studies at UC Berkeley, contend that the media predominantly view “terrorist actions and criminal activities committed by Muslims” through the lens of the terrorists’ religious faith.

Their analysis may well be correct, but it also seems like an attempt to counter an idea that they never explicitly address: that most ISIS fighters join because they are religious zealots. The governor of an Iraqi province now mostly occupied by ISIS is quoted as saying of the Baathist officers, “All of these guys got religious after 2003.” The piece’s final line, a quote from an Iraqi researcher, states, “There is no one in Baghdadi’s state who is not a believer,” implying that adherence to the ideology of ISIS leader Abu Bakr al-Baghdadi is mainly a survival strategy.

[T]here are journalists and scholars who present compelling cases that ISIS’s actions are at least partly grounded in the teachings of Islam. In a September 1 story in The New Republic, Graeme Wood traced al-Baghdadi’s appointment of himself as caliph, as well as the group’s “taste for beheadings, stonings, crucifixions, slavery, and dhimmitude, the practice of taxing those who refuse to convert to Islam,” to its “almost pedantic adherence to its own interpretation of Islamic law.” In an interview, Wood said that while he considers the political factors behind the group’s ascent “at least as important,” it is clear that “their beliefs are central to their self-conception” and are therefore vital to grasping the differences between ISIS and other jihadist groups. He observed that journalists who do not understand the way ISIS thinks “are missing a part of the story.”

David Cook, an associate professor at Rice University who studies Islam, is more emphatic: “To say that ISIS doesn’t have anything to do with Islam is just the statement of an ignoramus or an apologist. There is support for the things that ISIS does inside the Koran. There’s support for things like beheading and different exemplary punishments that you can easily find.”

ISIS’s eagerness to advertise its scriptural credentials suggests one possible explanation for the infrequency with which journalists mention the connection: a reluctance to be seen as legitimizing terrorist propaganda. As Quartz’s Ghosh argues, “When terrorists cite the Koran or the hadith, they do so selectively, choosing only those passages that can be interpreted to suit their perverse view of the world.

In judging ISIS, we also need to keep in mind that a number of :godly Christians" believe the Bible justifies murdering abortion providers - and gays.   Again, when are moderates going to stand up and stop the extremists of their own faith?
Posted by Michael-in-Norfolk at Sunday, September 21, 2014

The first word in the group's own choice of name IS "Islamic," and the caliphate is a Muslim concept. I would not be surprised if the "faith" of some ex-Baathists is as put on, as say that of "family values" Christianists, but the mobilization is in the name of Islam.