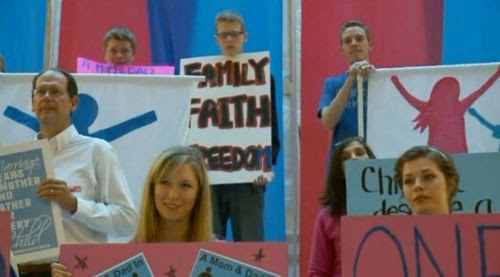 Exhibiting a mindset akin the that of ISIS - i.e., that all must adhere to their poisonous form of religious belief - Christofascists and Mormons rallied at the Utah capitol building in opposition to gay rights, particularly same sex marriage and gay adoption.  As is now the norm, those rallying tried to disguise their real motivation: religious based hate and bigotry and contempt for the First Amendment of the U.S. Constitution when applied to anyone but themselves.  The Salt Lake Tribune looks at the gathering of hate merchants and religious extremists.  Here are excerpts:

They were there for the children. Their own, others’, those who haven’t been born yet — even the children of gay couples.

Supporters of man-woman marriage holding signs declaring "biology is not bigotry" and "two moms don’t equal a dad" cheered long and loud as conservative activist Mary Summerhays projected on a screen images of same-sex couples and their children.

Summerhays, who leads the organizing group of Thursday’s rally, Utah Celebration of Marriage, said these children were among the chief reasons several hundred people gathered under the painted dome of the Utah State Capitol: to demonstrate to local and national officials, to media and onlookers that there is still support in Utah for so-called "traditional" families, made up of one mother and one father.

But up in the banisters and sprinkled among sign-holders on the Capitol steps were supporters of same-sex marriage, who held signs of their own denouncing hate and lauding "inalienable rights over states’ rights."

"We want to put a face on the people they’re discriminating against," he said. "If everything stopped tomorrow, and same-sex marriage went back to being illegal in Utah, gay and lesbian couples would still have and raise children. That’s just a fact. ... It’s been happening since the dawn of civilization."

Salt Lake City has one of the highest percentages of same-sex couples with children, according to the Williams Institute at the Univesrity of California-Los Angeles. As of last year, about 26 percent of all gay and lesbian couples in the metro area were raising children.

Utah has pointed to, but later backed away from, the findings of Mark Regnerus of the University of Texas, who offered research to bolster the claim that opposite-sex parenting is the "gold standard" for children.

The American Sociological Society has found that children raised in a two-parent home tend to do well — regardless of their parents’ gender.

Lawrence, and those who support same-sex marriage, took issue with the premise of Thursday’s event: that Utah’s main concern is to defend the rights of children and protect families.  "These people claim to be family oriented, they claim to be child oriented, but they’re not," Lawrence said. "Yet they promote discrimination that puts our families and our children in harm’s way."

The biggest threat same sex marriage poses to these extremists is that it challenges their mythical faith construct based on the Bible which science is continually proving that is not based on fact or reality.  Rather than use their minds and embrace knowledge, these individuals prefer ignorance, hate and bigotry.  It's one thing for these folks to cling to such ignorance based beliefs, but they should not be allowed to force them on others.