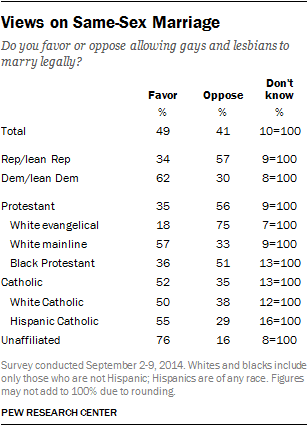 It's no secret that I believe religion is a toxic element in society - both here in America and across the globe.  While some try to point to charity work done by religious bodies to argue that religion is no a source of evil, if one totals up the deaths world wide from religious strife, especially over the centuries, and the hate and division that religion breeds, those "good works" pale in comparison to the carnage.  And not surprisingly, the Abrahamic religions seem to lead the way in their toxicity.   In the political realm, the GOP's opposition to marriage equality is seeing more Republicans complain that the GOP is too conservative.  And Catholic support for gay marriage suggests that the issue is a loser for the GOP, especially among Hispanic Catholics (the Vatican hopefully is paying attention) Commonweal looks at some of the new findings.  Here are highlights:

Yesterday Pew Research released the results of a new survey of public attitudes on the place of religion in political life. The major finding, as you may have seen, is that nearly three-quarters of Americans now say the influence of religion is waning. That figure is up more than twenty points--from 51 percent to 71--since 2001, when Pew first began measuring the trend.

Pew's research turned up a bunch of interesting findings related to same-sex marriage. Some of that data may surprise you, as it may prove frustrating to leading opponents of gay marriage.


The new survey shows a slight drop in support for gay marriage: 49 percent of Americans support it--that's down five points from February's survey. That may mean nothing. (Just as the finding that a five-point rise in the percentage of Americans who believe homosexuality is sinful may hold little meaning.) The year-over-year trend in support of gay marriage remains clear.

Less clear, however, is how the GOP will negotiate its positions on gay marriage, given how many self-identified Republicans are unhappy with the way their party handles that issue.

While most white Evangelicals are unhappy with the GOP's handling of gay marriage--no surprise there--among non-Evangelical Republicans, more say the party is too conservative than say it's too liberal.

[P]erhaps leaders of the anti-gay-marriage movement might consider what this data means for the way the people they're trying to persuade receive their message.

Email ThisBlogThis!Share to TwitterShare to FacebookShare to Pinterest
Labels: American Catholics, decline of religion, future of the GOP, gay marriage, Pew Poll, religion as an evil