The Real Threat to Heterosexual Marriage: The Economy and Straight Men If one listens to the Christofascists and the professional Christians who have made a cottage industry out of demonizing gays, educated single women, and of course, racial minorities, the number one threat to straight marriages is loving same sex couples getting married in civil ceremonies.   Indeed, same sex marriages according to the Christofascists threaten Western Civilization itself.   Interestingly, the Pew Research Center has released the results of a new study that find that the real threats to marriage are (i) the bad economy - which is a result of the GOP policies the Christofascists support - that prevents young men from finding decent, steady jobs, and (ii) a shortage of non-dead beat young men.  The take away is that if the Christofascists truly support the "sanctity of marriage" - which they don't - they would be supporting jobs programs, infrastructure investment, and economic stimulus programs.  A piece in Salon looks at the Pew findings.  Here are excerpts:

In 2012, a record one-in-five Americans 25 or older had never been married, the Pew Research Center reported today. This wasn't surprising, as matrimony has been on a decline for decades now. However, Pew did offer an extremely elegant, two-part illustration of the role economics have played in that process.

Part I: What are America’s young, unmarried women looking for in a mate? A steady job. 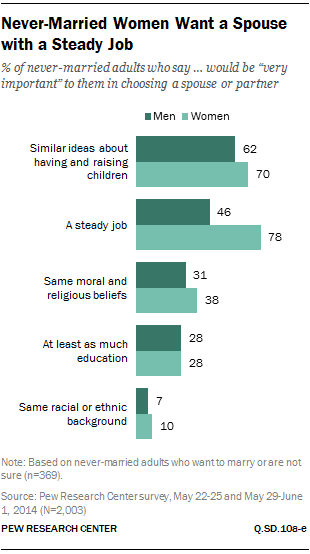 Part II: What do young, unmarried men lack? Steady jobs. For every 100 never married women between the ages of 25 and 34, there are just 91 employed and never-married men the same age. Where once America had a surplus of working single men, now it has a shortage. 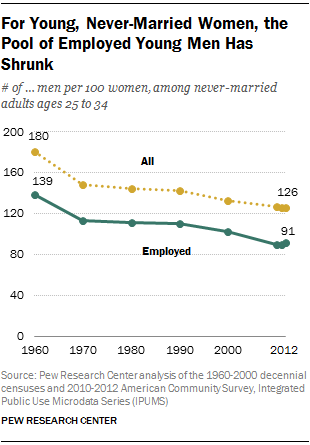 A dearth of eligible bachelors isn't the only reason marriage has been on the wane. Young people are getting married later in part because they spend more time in school. Back in the day, couples got hitched, then got settled financially; today, they prefer to get their finances in line first. Oh, and then there's birth control, changing social mores about sex out of marriage, etc.

But economics are an obvious and unavoidable dimension of the issue. That's why it's far-fetched to think we can revive the institution of marriage in a meaningful way without addressing the underlying forces that have left young men in such shabby financial shape.

Despite these realities, don't expect the Christofascists to change their politics or cease demonizing gays.  The real threat that gays - and our increasing acceptance in society - is that we make it harder and harder for Christofascists to continue to cling to their myth based religious beliefs.  For those afraid of thinking for themselves, nothing is more terrifying than facing the reality that much - if not most - of the Bible is fiction.   Adam and Eve never existed, so get over it!!
Posted by Michael-in-Norfolk at Thursday, September 25, 2014