Jeb Bush Will Not Save the Republican Establishment. 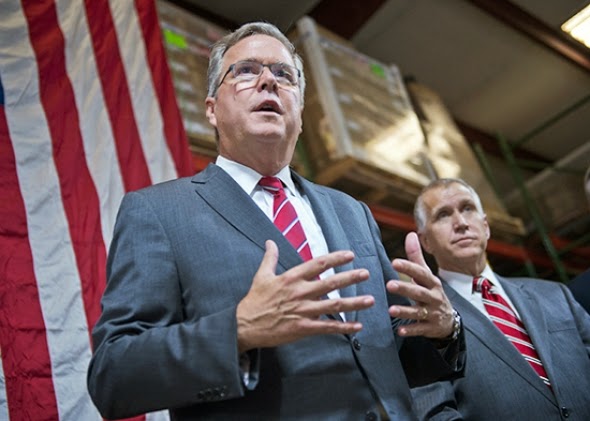 This weekend at the misnamed Value Voters Summit - the attendees at which share a mindset akin to that of those who backed the Salem witch trials - Ted Cruz, a demagogic lunatic in my view, won the so called straw poll for preferred GOP presidential candidates. The prospect of a Cruz candidacy ought to terrify the GOP establishment and anyone who hopes to steer the GOP back towards some remote semblance of sanity.  Some hope that Chris Christie will rehabilitate himself sufficiently to secure the GOP 2016 nomination, although the death grip of the Christofascists on the grassroots and nominating process could derail any such Christie effort.  Others hope that Mitt Romney will throw his hate in the ring again, although I and others believe that he is too damaged to successfully challenge someone like Hillary Clinton as the echos of Romney's "the 47%" comments continue to resonate.  That leaves potential savior number three, Jeb Bush.  A piece in Slate makes the case that Jeb Bush is dead in the water even before he starts.  Here are excerpts:

On Wednesday, Jeb Bush went to Greensboro, North Carolina, to stump for Thom Tillis, the state House speaker and the GOP candidate for the U.S. Senate. This wasn’t a policy seminar or think tank event, it was a party rally and Bush had one job—to give red meat and boost enthusiasm for a flailing campaign.

And he failed. Speaking to an audience of conservative North Carolinians, Bush made the case for immigration reform—“Fixing a system that doesn’t work is a big thing that I think will restore and sustain economic growth for this country”—and voiced his support for Common Core standards, a verboten stance among Republican voters.

That put Tillis in the uncomfortable position of needing to distance himself from his advocate, telling Bush that—on immigration—“You have to make it clear that amnesty shouldn’t be on the table,” and attacking the federal Department of Education as “a bureaucracy of 5,000 people in Washington.”

The New York Times called this “rough,” and it was—the tone-deaf showing of an amateur. Which gets to the problem of Jeb Bush.

At every turn, the former Florida governor is hailed as a savior for the Republican Party, and for good reason. Even with the baggage of his brother, he brings powerful advantages, from the network of the Bush dynasty and fundraising prowess, to policy chops, potential Latino support (on account of his time in Florida), and the enthusiasm of the GOP establishment.

But as almost anyone can tell you, there’s a huge step between “good on paper” and good, and, judging from his recent performance, it’s hard to say that Bush stands as a genuinely good candidate. Instead, he seems like a cipher—a vessel for the hopes and wishes of wealthy Republican donors, who fear another cycle of embarrassing candidates and lackluster campaigns.

The Tillis affair is representative of Bush’s flaws as a candidate. A more talented politician would have tailored his message to his audience. Indeed, it doesn’t take a savant to know that—if you’re supportive—immigration and Common Core are areas to avoid with a conservative audience. But then, Bush isn’t in the same world as rivals like Sen. Ted Cruz, Sen. Rand Paul, or even Gov. Chris Christie.

It’s possible that Bush could abandon this and shape himself into a warrior for Republican conservatism. But I doubt it. As a major advocate for Common Core (his Foundation for Excellence has collected millions from pro–Common Core groups) and immigration reform, he’s too removed from the world of conservative politics to adapt. And even if he could make the shift, he’d have to stand against more genuine competitors like Sen. Marco Rubio and (potentially) Wisconsin Gov. Scott Walker. Put another way, even after Bush flipped on a path to citizenship last year, he was still behind the curve on anti-immigration rhetoric.

Here are the facts: Jeb Bush has been out of the political game for almost a decade. If he had the intensity of a Richard Nixon or a Ronald Reagan—who had long respites from national politics before winning the presidency—it would be different. But he hasn’t done the usual work of regular campaigning and fundraising that defines the active candidate. If there’s a fire that defines a presidential contender, he doesn’t seem to have it.


Yes, Republican elites want a champion. But in Jeb Bush, they don’t have a fighter, they have a Fred Thompson. For a genuine contender, they’ll have to look elsewhere.

Part of me almost - "almost" being the operative word - feels sorry for Jeb Bush.  He, rather than the Chimperator, should have been the candidate in 2000.  Had he run and won, I suspect that much of the batshitery that the Chimperator and Emperor Palpatine Cheney unleashed on America and the world might not have come to pass.  Now, however, Jeb is both haunted by the horrid legacy of his brother and a political party that has gone ever more insane as the influence of the Christofascists has grown even stronger.