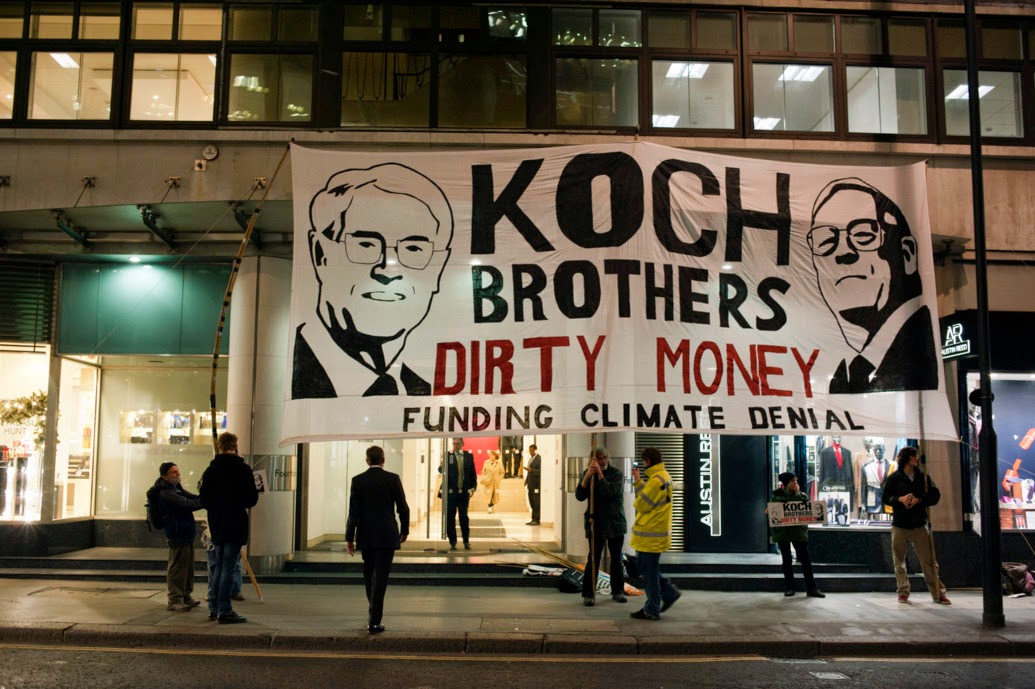 Few figures in today's political scene represent a bigger threat to average Americans and a functioning democracy than Charles and David Koch.  Between trying to buy Congress, dismantle safety and environmental regulations, and restoring the worse excesses of the Gilded Age, they seek to make average Americans little better than serfs eking out a meager living while the Kochs luxuriate with their billions of dollars.  If there is such a thing as the sin of greed, the Kochs truly embody it.   A long piece in Rolling Stone looks at not only the Koch brothers' political machinations but also their toxic industries from which their wealth flows.  It also traces their family's racist and far right views over the years.  These men are despicable and any decent Christian ought to be opposing their policies rather than embracing them as the Christofascists have done.  Here are article highlights:

The enormity of the Koch fortune is no mystery. Brothers Charles and David are each worth more than $40 billion. The electoral influence of the Koch brothers is similarly well-chronicled. The Kochs are our homegrown oligarchs; they've cornered the market on Republican politics and are nakedly attempting to buy Congress and the White House. Their political network helped finance the Tea Party and powers today's GOP. Koch-affiliated organizations raised some $400 million during the 2012 election, and aim to spend another $290 million to elect Republicans in this year's midterms. So far in this cycle, Koch-backed entities have bought 44,000 political ads to boost Republican efforts to take back the Senate.

What is less clear is where all that money comes from. Koch Industries is headquartered in a squat, smoked-glass building that rises above the prairie on the outskirts of Wichita, Kansas. The building, like the brothers' fiercely private firm, is literally and figuratively a black box. Koch touts only one top-line financial figure: $115 billion in annual revenue, as estimated by Forbes. By that metric, it is larger than IBM, Honda or Hewlett-Packard and is America's second-largest private company after agribusiness colossus Cargill. The company's stock response to inquiries from reporters: "We are privately held and don't disclose this information."

But Koch Industries is not entirely opaque. The company's troubled legal history – including a trail of congressional investigations, Department of Justice consent decrees, civil lawsuits and felony convictions – augmented by internal company documents, leaked State Department cables, Freedom of Information disclosures and company whistle­-blowers, combine to cast an unwelcome spotlight on the toxic empire whose profits finance the modern GOP.

Under the nearly five-decade reign of CEO Charles Koch, the company has paid out record civil and criminal environmental penalties. And in 1999, a jury handed down to Koch's pipeline company what was then the largest wrongful-death judgment of its type in U.S. history, resulting from the explosion of a defective pipeline that incinerated a pair of Texas teenagers.

The volume of Koch Industries' toxic output is staggering. According to the University of Massachusetts Amherst's Political Economy Research Institute, only three companies rank among the top 30 polluters of America's air, water and climate: ExxonMobil, American Electric Power and Koch Industries. Thanks in part to its 2005 purchase of paper-mill giant Georgia-Pacific, Koch Industries dumps more pollutants into the nation's waterways than General Electric and International Paper combined. The company ranks 13th in the nation for toxic air pollution. Koch's climate pollution, meanwhile, outpaces oil giants including Valero, Chevron and Shell.


The toxic history of Koch Industries is not limited to physical pollution. It also extends to the company's business practices, which have been the target of numerous federal investigations, resulting in several indictments and convictions, as well as a whole host of fines and penalties.

Koch Industries is not a major oil producer. Instead, the company has woven itself into every nook of the vast industrial web that transforms raw fossil fuels into usable goods. Koch-owned businesses trade, transport, refine and process fossil fuels, moving them across the world and up the value chain until they become things we forgot began with hydrocarbons: fertilizers, Lycra, the innards of our smartphones.
The company controls at least four oil refineries, six ethanol plants, a natural-gas-fired power plant and 4,000 miles of pipeline.

Koch's hunger for growth is insatiable: Since 1960, the company brags, the value of Koch Industries has grown 4,200-fold, outpacing the Standard & Poor's index by nearly 30 times. On average, Koch projects to double its revenue every six years. Koch is now a key player in the fracking boom that's vaulting the United States past Saudi Arabia as the world's top oil producer, even as it's endangering America's groundwater.

Koch is also long on the richest – but also the dirtiest and most carbon-polluting – oil deposits in North America: the tar sands of Alberta. . . . . Over the past dozen years, the company has quietly acquired leases for 1.1 million acres of Alberta oil fields, an area larger than Rhode Island. By some estimates, Koch's direct holdings nearly double ExxonMobil's and nearly triple Shell's.

Fred [David and Charles' father] also became a major benefactor and board member of the John Birch Society, the rabidly anti-communist organization founded in 1958 by candy magnate and virulent racist Robert Welch. Bircher publications warned that the Red endgame was the creation of the "Negro Soviet­ Republic" in the Deep South. In his own writing, Fred described integration as a Red plot to "enslave both the white and black man."

Koch wasn't just cutting corners on its pipelines. It was also violating federal environmental law in other corners of the empire. Through much of the 1990s at its Pine Bend refinery in Minnesota, Koch spilled up to 600,000 gallons of jet fuel into wetlands near the Mississippi River. Indeed, the company was treating the Mississippi as a sewer, illegally dumping ammonia-laced wastewater into the river – even increasing its discharges on weekends when it knew it wasn't being monitored. Koch Petroleum Group eventually pleaded guilty to "negligent discharge of a harmful quantity of oil" and "negligent violation of the Clean Water Act," was ordered to pay a $6 million fine and $2 million in remediation costs, and received three years' probation. This facility had already been declared a Superfund site in 1984.

The Smalley trial underscored something Bill Koch had said about the way his brothers ran the company: "Koch Industries has a philosophy that profits are above everything else." A former Koch manager, Kenoth Whitstine, testified to incidents in which Koch Industries placed profits over public safety. As one supervisor had told him, regulatory fines "usually didn't amount to much" and, besides, the company had "a stable full of lawyers in Wichita that handled those situations." When Whitstine told another manager he was concerned that unsafe pipelines could cause a deadly accident, this manager said that it was more profitable for the company to risk litigation than to repair faulty equipment. The company could "pay off a lawsuit from an incident and still be money ahead," he said, describing the principles of MBM to a T.

The jury was emphatic, awarding Smalley $296 million – then the largest wrongful-death judgment in American legal history. He later settled with Koch for an undisclosed sum and now runs a pipeline-safety foundation in his daughter's name. He declined to comment for this story. "It upsets him too much," says an associate.

There is much, much more.  Read the entire article and you will be both disgusted and outraged.
Posted by Michael-in-Norfolk at Saturday, September 27, 2014

...and what is really funny is I JUST saw a commercial for Koch Industries and all it does for America and my local community. I guess the spotlight is getting them trying to get good PR out as much as possible