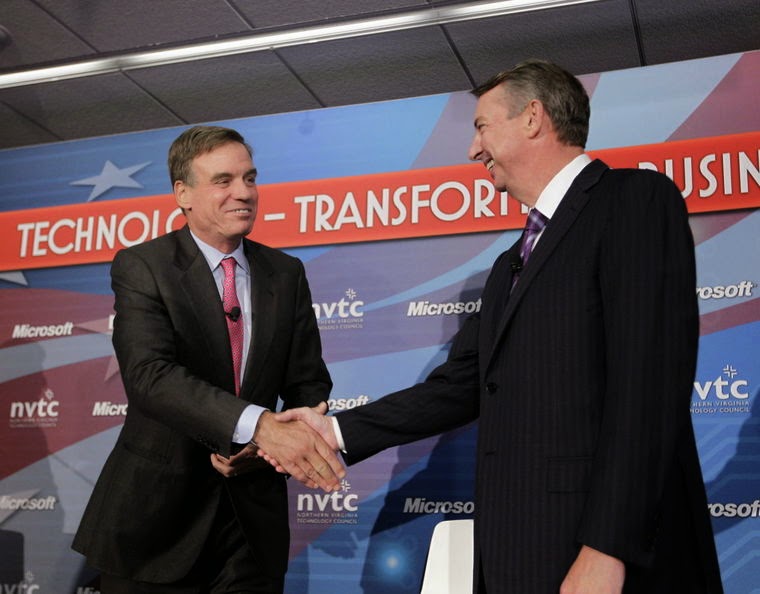 Things are heating up in the Mark Warner v. Ed Gillespie race for the U.S. Senate.  Gillespie has been running disingenuous ads and trying to deceive Virginians into believing that he's offering something new instead of the same failed GOP economics of the last 30 plus years (as well as the GOP's anti-woman, anti-gay, and anti-minority platform).  Of even more concern is his preference for speaking to elements of the GOP base in gatherings from which the press is barred, suggesting that Gillespie is spouting statements like Mitt Romney's 47% statement that helped immolate Romney's campaign.  In return Mark Warner has run fairly tame ads.  Thankfully, a super PAC is hitting Gillespie hard and underscoring his sleazy past.  The Richmond Times Dispatch looks at the ad war (it's noteworthy that Warner supporters are major players in the business community which Gillespie claims to represent and suggests that Gillespie, like Ken Cuccinelli, is too extreme on social issues).  Here are excerpts:

As Ed Gillespie, the GOP candidate for U.S. Senate, teamed up with Senate Minority Leader Mitch McConnell to tap into wealthy Republican donors at a private fundraiser in McLean on Wednesday,
Sen. Mark R. Warner is getting outside help from prominent Democratic backers.

Virginia Progress has spent $1.4 million in TV ads this election season to oppose Gillespie, according to the Federal Election Commission.

Some political analysts interpret the super PAC’s spending as an indication that Virginia’s Senate race may be closer than the polls suggest — most have Warner up by a comfortable lead over Gillespie.

But Larry Sabato, head of the Center for Politics at the University of Virginia, said there is no objective indication that the contest is especially close.

“I see no evidence that it is being treated as such by GOP groups,” Sabato said. Warner campaign spokesman David Turner said the campaign would not comment as Virginia Progress is an independent PAC.

As of June 30, the most recent reporting deadline, Warner’s campaign has raised $9.9 million and had $8.9 million cash on hand. Gillespie had raised$4.2 million with $3.1 million in cash.

Posted by Michael-in-Norfolk at Thursday, September 25, 2014