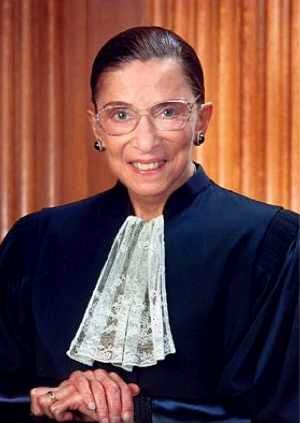 In some respects one of the most important aspects of presidential elections in America is the power of the president to nominate appointees to the U.S. Supreme Court.  But that power of appointment is not unlimited.  Nominees still must pass approval by the U.S. Senate.  Something that is not as assured as it once was given the non-stop obstruction of today's Congressional Republicans.  A piece in Politico looks at Justice Ruth Bader Ginsburg's explanation of why she will not retire for as long as possible.  Here are article excerpts:

Supreme Court Justice Ruth Bader Ginsburg is pushing back against suggestions that she should soon retire, saying President Barack Obama would be unable to get a justice like her through the Senate.

“Who do you think President Obama could appoint at this very day, given the boundaries that we have?” the 81-year-old justice told Elle Magazine in an interview excerpt released Tuesday. The wide-ranging interview portrays Ginsburg — seen as a member of the court’s liberal wing — as attuned to the dynamics in Congress and some of the greater political and social discussions in the U.S.

In the interview, she suggested that Senate Republicans would likely block any potential nominee like her.

“If I resign any time this year, he could not successfully appoint anyone I would like to see in the court,” the oldest member of the high court said. “[A]nybody who thinks that if I step down, Obama could appoint someone like me, they’re misguided,” later adding that she can “do the job full steam.”

Tuesday’s excerpt focused largely on the court’s conservative shift in recent years and Ginsburg’s disappointment with its rulings on women’s issues.

When asked why the court has become “very conservative” on women’s rights, Ginsburg singled out a particular justice.

“To be frank, it’s one person who made the difference: Justice [Anthony] Kennedy,” she said, the justice often seen as the court’s swing vote given the court’s relatively entrenched liberal and conservative camps of four justices each. Ginsburg said that since upholding Roe v. Wade, Kennedy has been largely responsible for the upholding of several abortion restrictions.

When asked which decisions she thinks will be considered most significant 50 years from now, Ginsburg pointed to June’s ruling in Burwell v. Hobby Lobby, in which the court said corporations could use religious exemptions to avoid paying for contraception coverage under the Affordable Care Act.

“Well, I think 50 years from now, people will not be able to understand Hobby Lobby,” said the justice, who wrote a blistering dissent in the case.