How the GOP Stopped Caring About Average Americans 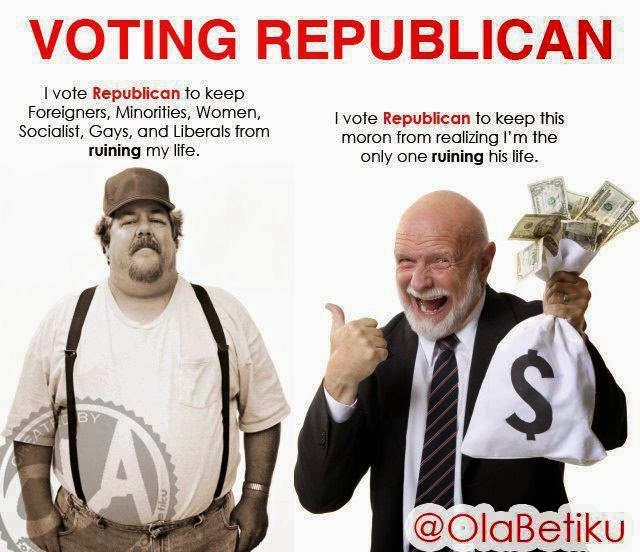 A piece in the Washington Post looks at the descent of the Republican Party from a party that pushed progressive measures to one that rejects knowledge - indeed, the embrace of ignorance is now deemed a virtue - and seeks to undo so many of the policies the party once championed.  My family members were Republicans for generations largely because of the party's moderate social positions and respect for knowledge and logic.  Now, none of us are Republicans because the GOP now stands for the opposite of what it once did.  On top of that, the GOP is now the party of open racism. Here are column highlights:

In 1862 , in the midst of the Civil War, Republican Justin Smith Morrill stood in Congress to defend his party’s invention: an income tax . The government had the right to demand 99 percent of a man’s property, the Vermont representative thundered. If the nation needs it, “the property of the people . . . belongs to the government .” The Republican Congress passed the income tax — as well as a spate of other taxes — and went on to create a strong national government. By the time the war ended, the GOP had invented national banking , currency and taxation; had provided schools and homes for poor Americans; and had freed the country’s 4  million slaves.

A half-century later, when corporations dominated the economy and their owners threw their weight into political contests, Theodore Roosevelt fulminated against that “small class of enormously wealthy and economically powerful men, whose chief object is to hold and increase their power.” Insisting that America must return to “an economic system under which each man shall be guaranteed the opportunity to show the best that there is in him,” the Republican president called for government to regulate business, prohibit corporate funding of political campaigns, and impose income and inheritance taxes.

In the mid-20th century, Republican President Dwight Eisenhower recoiled from using American resources to build weapons alone, warning, “Every gun that is made, every warship launched, every rocket fired signifies, in the final sense, a theft from those who hunger and are not fed, those who are cold and are not clothed.” He called for government funding for schools, power plants, roads and hospitals.

Like Lincoln and Roosevelt before him, Eisenhower adhered to the classic Republican view of government and set out to use it to guarantee economic opportunity in the postwar world. He cut regulations and price controls for certain businesses, but vetoed laws he thought unfairly favored businessmen and endorsed an upper income-tax bracket of 91 percent. Under his direction, Congress invested in education and infrastructure: The 1956 Federal-Aid Highway Act remains one of the largest public-works programs in history. He defended the right to economic opportunity for every hard-working American, putting government muscle behind desegregation. During Eisenhower’s administration, the middle class expanded, and the country thrived.

But business leaders who hated government regulation insisted that Eisenhower’s policies were tantamount to communism.  They pointed to desegregation as proof that the government was redistributing tax dollars to undeserving minorities, and their mingling of racism and communist fears won votes. By the 1970s, in an uncanny echo of the 1890s and the 1920s, Republican economists had embraced the old idea that only deregulation and unfettered capitalism would create wealth, which would then trickle down to everyone.

After 1980, the government slashed taxes and social welfare spending, even as it boosted defense spending, and once again, wealth stratified. Between 1979 and 2008, the after-tax income of the wealthiest 1 percent of Americans grew 275 percent. By 2007, the top fifth of American earners made more than the other four-fifths combined.

Perhaps with the influx of young people, immigrants and minorities into the voting population, the cycle can finally be broken. These voters are too young to remember the Cold War and are more comfortable across ethnic lines, making it harder to rally them with the specters of socialism or racial conflict. Forced to adapt to a changing nation, in this century, perhaps, the Republican Party will find a way to stay committed to the ideals of its founders.

Posted by Michael-in-Norfolk at Sunday, September 21, 2014