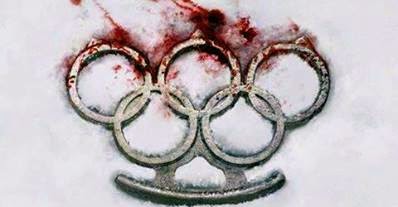 In the lead up to the 2014 Winter Olympics in Adolph Hitler want to be Vladimir Putin's Russia the International Olympic Committee ("IOC") made numerous mealy mouthed statements about opposing anti-LGBT discrimination even as the IOC gave the equivalent of politico fellatio to Putin.  For many, the IOC's disingenuous statements went nowhere near far enough.  Now, in the aftermath of the blow back from the Sochi Games, the IOC has amended the contract that future host cities/countries must sign.  For some future host cities/countries, the new non-discrimination requirements will be a problem (e.g., South Korea).  Some would be hosts may no longer even be able to pass selection criteria.  Let's hope similar requirements are adopted by additional sporting organizations and that scheduled events are moved out of anti-gay countries.    Here are highlights from an All Out press release on the development:

September 24, 2014. Following the international outcry over Russia’s anti-gay legislation that overshadowed the 2014 Sochi Winter Olympic Games, the International Olympic Committee (IOC) announced in a letter to prospective host cities that it would be adding a new anti-discrimination clause to its host city contract. This important change comes in the wake of enormous public pressure on the IOC from All Out and and other human rights organizations in Russia and around the world in the lead up to the Sochi Games.

In March this year, more than 80,000 All Out members called on the IOC to add human rights provisions to the host city contract. In addition, an unprecedented coalition of human rights organizations led by All Out, Athlete Ally, and Human Rights Watch, sent an open letter to IOC president Thomas Bach, urging the IOC to make these changes. All Out, in partnership with Athlete Ally, also launched the Principle 6 campaign last year to highlight the Olympic principle of non-discrimination and give athletes and fans a way to speak out against Russia’s anti-gay laws before and during the Games. More than 50 Olympians, including a dozen competing in Sochi, joined the campaign.

According to IOC Sports Director, Christopher Dubi, the new clause will include “the prohibition of any form of discrimination, using the wording of Fundamental Principle 6 of the Olympic Charter." This clause will ensure that future host cities must abide by international human rights standards in order to host the games, including the protection of lesbian, gay, bisexual and transgender citizens and athletes.

“By adopting a non-discrimination clause into its host city contracts, the IOC is showcasing its own realization that we must protect the rights of every athlete to live free and openly,” said Hudson Taylor, Executive Director of Athlete Ally. “The Principle 6 campaign sought to shed light on the responsibility of host countries to uphold the olympic values, and this action validates all of the hard work by organizations and individuals across the world who’ve engaged in the fight for LGBT equality. Though there’s work to be done, this is a major step in the right direction.”