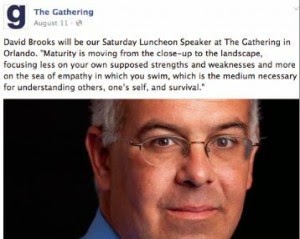 It's not just the GOP that prostitutes itself to far right Christofascists.  Top columnists for the New York Times and the Washington Post seemingly suffer from a similar affliction.  As TwoCare.org is reporting,  David Brooks of the New York Times (also a National Public Radio commentator) and Michael Gerson of the Washington Post will be attending and speaking at the four-day annual conference known as The Gathering that starts tomorrow at  the luxury Ritz Carlton hotel in Orlando, Florida.  As noted in a recent post, The Gathering and its main participants are the largest exporters of anti-gay hate and animus across the globe.  One has to wonder how much Brooks and Gerson are being paid to participate in this gathering of hate merchants and extremists.  Here are article highlights:

Recently, government-encouraged outbreaks of mob violence against LGBT persons in countries from Uganda to Russia, and draconian new anti-gay legislation in those countries too, have gained growing media notice – some of which has focused on the role American evangelicals have played in inciting such hatred.

But the American culprits are not being funded from the margins. Tens of millions (possibly evens hundreds of millions) of dollars for that project is coming from the foundations whose representatives assemble yearly at an event known as The Gathering, where multimillionaire and billionaire evangelical funders of the culture wars from the families DeVos, Coors, Prince, Maclellan, Friess, Ahmanson, and others, and heads of the mammoth National Christian Foundation – gather, dine, and strategize.

This Thursday September 25th, at the luxury Ritz Carlton hotel in Orlando, Florida, an evening series of briefings will kick off the premier funding event of the evangelical right in America, a four-day annual conference known as The Gathering. Scheduled to speak at the conference are David Brooks of the New York Times (also a National Public Radio commentator) and Michael Gerson of the Washington Post.

It’s an invite-only event, reserved for speakers and heads of evangelical foundations that dole out over $200,000 a year. Foundations associated with The Gathering now dole out upwards of $1 billion dollars annually.

Giving a presentation at the Thursday evening kickoff will be Terry Parker, a board member of the nonprofit that hosts The Gathering and also a co-founder of the National Christian Foundation, which is now the 12th biggest charity in America by one ranking and whose anti-LGBT funding pattern is so extensive that I’ve written a small encyclopedia to profile some of the more egregious anti-gay groups NCF bankrolls.

Could leading New York Times, Washington Post, and National Public Radio columnists and commentators really be planning to speak at an annual event that, in financial and legal terms, is probably the epicenter of anti-gay rights evangelical activism from the U.S. to Uganda to Russia ? The answer is yes.

Are they aware of what they’re participating in (and implicitly supporting by lending their names to the event) or have they been conned ? We may never know the truth but we can safely assume the answers will lie on the “ignorance” side of the dilemma.

But such high profile mainstream media patronization of The Gathering raises the question: if such esteemed NYT, All Things Considered and Washington Post columnists and commentators – who have been granted their big and influential media platforms because of their supposed penetrating level of insight, can’t parse mainstream evangelicalism from what’s going on at The Gathering, why should we – or Washington and New York elites – pay attention to their opinions on religion and politics ?

What little respect that I had for Brooks and Gerson is now totally gone.  One has to wonder if the Times and Post realize the sleazy, theocratic thugs their columnists are whoring themselves out to.