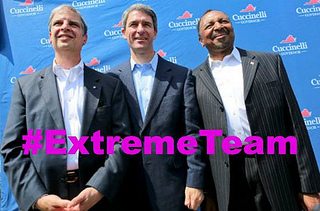 Meanwhile, as the ad mentioned in the last post prepares to run, panic appears to be setting in Republican circles.  This is a very good thing because, if the perception becomes one that Cuccinelli has already lost, it may depress Republican turn out.  The risk, of course, is that Democrats become complacent and stay home.  This cannot be allowed to happen because in my view it is crucial that Cuccinelli and the rest of the GOP extremist slate lose, but that they lose by a landslide.  Why?  Because the GOP slate was nominated by The Family Foundation and Tea Party extremists.  A horrific loss may be what the Virginia GOP needs to convince what moderates are left and the so-call GOP establishment to wrench the GOP back from the forces of hate and bigotry best personified by the Christofascists and Tea Party factions.  The Washington Post looks at the growing panic in the Virginia GOP.  Here are excerpts:

National and state Republicans are increasingly nervous about Attorney General Ken Cuccinelli II’s campaign for Virginia governor, which they said is lagging behind Democrat Terry McAuliffe because of internal mistakes as well as forces beyond Cuccinelli’s control.

With seven weeks to Election Day, Cuccinelli is trailing in public polls and in fundraising. Republicans are scrambling to improve a field operation that underperformed in 2012. And while McAuliffe has faced scrutiny for his business dealings, the legal cloud surrounding Gov. Robert F. McDonnell (R) and a probe of how the attorney general’s office has handled a gas royalties case have cast a spotlight on Cuccinelli’s own ethics that neither party expected.

Several Republican officials and operatives outside the campaign, most of whom requested anonymity in order to be frank about the state of the race, said they believe Cuccinelli is down . . . .


“I think McAuliffe has a real advantage in the race,” said Stuart Rothenberg, editor of the nonpartisan Rothenberg Political Report.

Now that Labor Day has passed, Rothenberg said, voters’ “opinions are gelling. That doesn’t mean the race is over, but there is a significant burden now on Cuccinelli to change the trajectory. . . . He’s going to have to get a significant portion of the people who haven’t made up their minds yet.”

In a memo on the state of the race issued Friday, McAuliffe spokesman Brennan Bilberry suggested the Cuccinelli team was becoming “shrill” and desperate.

Again, we need a massive Democrat turn out to hand Cuccinelli, Jackson and Obenshain a massive defeat.  The Family Foundation and Tea Party extremists nominated this nutcases and a devastating loss would be wonderful to hang around their necks.  Such a defeat would lead to delicious back biting and backstabbing within the Virginia GOP and perhaps embolden Republicans elsewhere to seize the party back from extremists and white supremacists.  The Family Foundation and Tea Party extremists need to become persona non gratis within the Virginia GOP from November 5th on forward.
Posted by Michael-in-Norfolk at Saturday, September 14, 2013

shouldn't they have started worrying a few months ago when all of this mess started rearing its head?