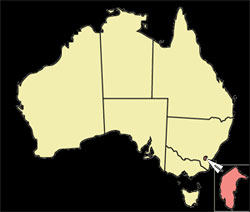 Despite the efforts by conservatives and a vow by newly elected prime Minister Tony Abbott to block gay marriage in Australia, the Australian Capital Territory - Australia's equivalent to the District of Columbia - is promising to enact gay marriage legislation before the end of the year.  As has happened in America, once gay marriage comes to one state or territory, pressure will increase in others to follow suit.  As is always the case, the "godly Christian" folk are opposed to the measure since they only feel good about themselves when forcing their poisonous religious beliefs on all citizens just like their American Christofascist counterparts.  The Guardian looks at the development.  Here are highlights:

The Australian Capital Territory government is set to legalise same-sex marriage by the end of the year and chief minister Katy Gallagher told Guardian Australia that she doesn’t expect the federal Coalition government to overturn the legislation.

The Labor administration of the territory will put forward a bill that will enable gay marriage, following a decade-long attempt to legislate in the area.

Seven years ago, the John Howard-led government used its federal powers to overturn an ACT move to allow same-sex civil unions. The ACT has since reinstated civil unions.

The legislation is set to be an early test for the prime minister elect, Tony Abbott, who has consistently opposed same-sex marriage but has held out the prospect of a vote on the issue at some time in the future.

Gallagher told Guardian Australia that she didn’t expect the Coalition to intervene to prevent gay marriage in the ACT.  “We’ve been pretty clear on this issue for some time now and there’s overwhelming community support for this,” she said.

“Any intervention won’t be easy and we certainly don’t want to be the first test of the new Senate. I think opposition to this has softened within politics in acknowledgment of the fact that the community has shifted its view in favour.

The federal government’s power over the territories has changed since Howard used his executive veto. A repeal of ACT marriage equality would have to pass both houses of the federal parliament, presenting a potentially tricky challenge for the Abbott government.

Gallagher said that she expected the ACT’s stance on marriage equality to be replicated across Australia.

“I can see Tasmania is making a good effort in this area but we will be the first,” she said. “I would expect that something will be put to the federal parliament in this term. The Labor party has led this debate nationally and I expect more and more people to support it. We have waited long enough for this.”

On Thursday, the Australian Christian Lobby urged federal Labor not to introduce a private member’s bill to legalise same-sex marriage.

Posted by Michael-in-Norfolk at Saturday, September 14, 2013