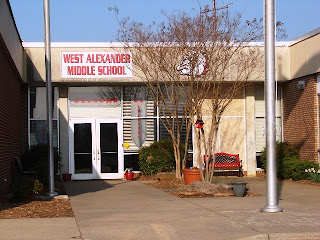 North Carolina continues its descent into batshitery by embracing Christofascist dogma and drawing negative national publicity to itself.  Indeed, since the Republicans took control of the state's government, it appears that everything possible is being done to convince modern, progressive businesses that North Carolina is to be avoided like the plague.  The latest story to underscore that North Carolina has become a state where hate and bigotry flourish involves the suspension of a middle school teacher who a class Macklemore's "Same Love" video.  As if many of the little darlings haven't already heard the song - its even been number 1 on local pop stations in backwards Hampton Roads - or seen the video.  The Charlotte Observer looks at the Inquisition like behavior of the school administration.  Here are excerpts:

A Taylorsville teacher has been suspended for showing a group of students a music video for a song that supports same-sex marriage.

The video in question is for the song “Same Love,” the fourth single released by Seattle rap artist Macklemore and producer Ryan Lewis.

It’s the first song that promotes gay marriage to make it into the Top 40, according to gay rights advocates. It was ranked 13th this week.

Alexander County Schools Associate Superintendent Jeff Peal told the Taylorsville Times: “At West Alexander Middle School, there was an inappropriate video shown in class, outside the bounds of the curriculum that called for disciplinary action last week.”

Peal didn’t name the teacher in the article.

The video goes through the life of a gay man and includes images of him kissing his boyfriend, getting married and lying motionless in a hospital bed while holding his partner’s hand.

The video has been viewed nearly 78 million times on Youtube, and was featured as part of the website’s Pride Week.