Syria - Is the Myth of American Exceptionalism Part of Obama's Problem? 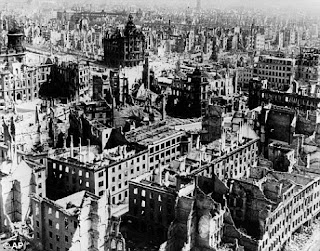 I trust Vladimir Putin about as much as I would trust a rattlesnake.  I view the man as scheming and manipulative and his recent signing of anti-gay laws in Russia demonstrates that he talks out of both sides of his mouth when it comes to respecting differences in people and supporting international law.  That said, he has an op-ed in the New York Times that does raise interesting and relevant points about Barack Obama's rush to take the United States to war in Syria.  Among them is the dangerous mindset of too many Americans that America is "exceptional."  American exceptionalism is in my view a dangerous myth that stands only when one white washes the many horrors America has committed ranging from its policy of exterminating native Americans to stealing Hawaii by over throwing an independent government to incidents like the fire bombing of Dresden during World War II (pictured in ruins above) in which somewhere between 25,000 and 500,000 civilians died.  Here are excerpts from Putin's op-ed which must be read with caution, but not ignored either:

No one wants the United Nations to suffer the fate of the League of Nations, which collapsed because it lacked real leverage. This is possible if influential countries bypass the United Nations and take military action without Security Council authorization.

The potential strike by the United States against Syria, despite strong opposition from many countries and major political and religious leaders, including the pope, will result in more innocent victims and escalation, potentially spreading the conflict far beyond Syria’s borders. A strike would increase violence and unleash a new wave of terrorism. It could undermine multilateral efforts to resolve the Iranian nuclear problem and the Israeli-Palestinian conflict and further destabilize the Middle East and North Africa. It could throw the entire system of international law and order out of balance.

Syria is not witnessing a battle for democracy, but an armed conflict between government and opposition in a multireligious country. There are few champions of democracy in Syria. But there are more than enough Qaeda fighters and extremists of all stripes battling the government. The United States State Department has designated Al Nusra Front and the Islamic State of Iraq and the Levant, fighting with the opposition, as terrorist organizations.


It is alarming that military intervention in internal conflicts in foreign countries has become commonplace for the United States. Is it in America’s long-term interest? I doubt it. Millions around the world increasingly see America not as a model of democracy but as relying solely on brute force, cobbling coalitions together under the slogan “you’re either with us or against us.”

But force has proved ineffective and pointless. Afghanistan is reeling, and no one can say what will happen after international forces withdraw. Libya is divided into tribes and clans. In Iraq the civil war continues, with dozens killed each day. In the United States, many draw an analogy between Iraq and Syria, and ask why their government would want to repeat recent mistakes.

My working and personal relationship with President Obama is marked by growing trust. I appreciate this. I carefully studied his address to the nation on Tuesday. And I would rather disagree with a case he made on American exceptionalism, stating that the United States’ policy is “what makes America different. It’s what makes us exceptional.” It is extremely dangerous to encourage people to see themselves as exceptional, whatever the motivation. There are big countries and small countries, rich and poor, those with long democratic traditions and those still finding their way to democracy. Their policies differ, too. We are all different, but when we ask for the Lord’s blessings, we must not forget that God created us equal.

I would ask Mr. Putin to reread his last sentence and then justify the anti-gay laws he has championed in order to gain support from the foul leadership of the Russian Orthodox Church, a church with a long history of opposing freedom and equality.  He needs to practice what he is preaching.

The really funny part of all this is that just a few years ago Scott Lively, Tony Perkins, Bryan Fischer and the like would have been decrying the godless communists in Russia. Now, they're suddenly best friends. Totally forgotten is Russia's long history of religious oppression, especially against Christianity. So long as they also hate the gays, then I guess, "the enemy of my enemy is my friend."