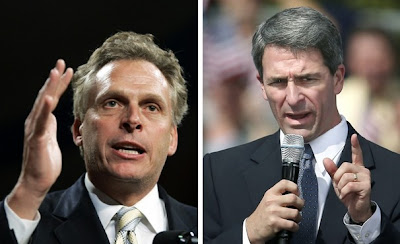 In what I would argue is the only sane and responsible thing that it could do, the Virginian Pilot has endorsed Terry McAuliffe for Governor of Virginia over the downright scary Ken Cuccinelli.  While the Pilot doesn't necessary love McAuliffe, ultimately there little contest as to who should be elected to the Governor's mansion from the options available.  My own column in the September issue of VEER Magazine (it hits the newsstands on the 15th) lays out the case why given the options, backing McAuliffe, is the only choice if one wants to move Virginia forward as opposed to dragging it backward to a 1950's status.  Here are excerpts from the Pilot's endorsement:

[O]ne of these three men will be elected governor on Nov. 5, and Virginians would do well to make sure that person is Terry McAuliffe. He is more capable of governing effectively, and is less likely to embarrass Virginia, than either of the other candidates.

It's not an easy call. The Democratic nominee has never held elected office. . . . . Only a Gov. McAuliffe, though, would be held accountable in Richmond.

The Republican nominee, Attorney General Ken Cuccinelli, would have no counterbalance to his extreme agenda. The Libertarian, Robert Sarvis, would have no easy way to get things done.

McAuliffe likes to say he's willing to work with anybody, and the heavy Republican composition of Virginia's General Assembly would demand as much.  It's one of the reasons he has drawn the backing of so many independent-minded voters, current and former Republicans and the state's largest trade group, the Virginia Association of Realtors.

He has waged a campaign that revolves largely around sensible business-friendly policies: Harnessing the community college system to bolster workforce development; prohibiting discrimination based on sexual orientation in the workplace; expanding Medicaid under the federal Affordable Care Act; and supporting education reform that emphasizes critical thinking.

He would provide a firewall against some of the more extreme social policy proposals to surface in the General Assembly, and he has pledged to avoid the type of scandal plaguing Gov. Bob McDonnell by banning himself or his family from receiving any gift worth more than $100.

A spokesman for Cuccinelli's campaign rejected an invitation to talk with this paper's Editorial Board, making it impossible to know whether his views have evolved since 2009.  There is no indication they have. As attorney general, he has validated the conclusion this board reached four years ago: "Cuccinelli's election would bring embarrassment to Virginia, instability to the state's law firm and untold harm to the long list of people who don't fit his personal definition of morality."

Further eroding his credibility is his connection to two ongoing controversies. The first involves his office's advice to an energy company fighting Virginia landowners over coalbed methane gas. The company donated more than $100,000 to Cuccinelli's gubernatorial campaign in the past year.
The other is Cuccinelli's claims that he "forgot" to promptly disclose a vacation and a Thanksgiving dinner from the same businessman whose generosity toward the governor has triggered a federal investigation.

Cuccinelli's failure in high-profile legal battles against the federal government have succeeded mostly in giving him a platform to gain an audience with tea party followers, to peddle his book and to magnify partisan division and distrust.  In November, Virginia's voters should free him to pursue such goals full-time. They can do that by voting for McAuliffe.

Sometimes elections are not about voting for a candidate that one is thrilled with but instead selecting the best choice from the options available.  Not voting is not an option if one is a responsible citizen because staying home is tantamount to a vote for Ken Cuccinelli and the Christian Taliban regime he would usher in.  For gays, women, minorities and business owners, a Cuccinelli victory would be a nightmare come true.
Posted by Michael-in-Norfolk at Sunday, September 08, 2013