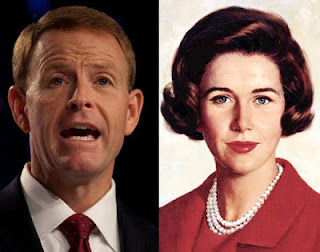 Tony Perkins - the KKK affiliated leader of registered hate group Family Research Council - has his panties in a wad and is calling on godly Christofascists to boycott Betty Crocker products in particular and General Mills products in general.  Why?  Because the company has been supportive of gay marriage and recognizes that a majority of Americans now support marriage equality.  Of course, the idea of a Christofascist boycott is a farce.  When faced with a boycott orchestrated by American Family Association, another registered hate group, Starbucks' saw its profits increase significantly.  I for one will make a point of buying General Mills products.  Here's a sampling of Perkins' spittle flecked caterwalling:

At Betty Crocker, the only thing they're mixing up is their priorities. Hi, I'm Tony Perkins of the Family Research Council in Washington, D.C. If you ask conservatives, Betty Crocker's latest promotion is a recipe for disaster. This summer, the famous dessert line decided to jump on the same-sex "marriage" bandwagon-and bring cakes to celebrate. In Minnesota, where parent company General Mills is headquartered, Betty Crocker decided to donate wedding cakes to the first homosexual couples who exchanged vows on the first day that counterfeit marriage was legal. "Betty celebrates all families," said manager Laura Forero. "We don't want to be old fashioned," the company explained. Unfortunately for General Mills, the majority of Americans think natural marriage is anything but old fashioned. And they've made it tough on companies like Target, Starbucks, and JC Penney who disagree. Know where your money is going. When you're at the store, think outside the Betty Crocker box! For a full list of products that are undermining marriage, check out DumpGeneralMills.com.


The irony, of course, is that Christofascists like Perkins have a conniption fit when LGBT groups call for boycotts of anti-gay companies.  Joe Jervis sums up the hypocrisy well:

When anti-gay Christianist hate groups call for nationwide boycotts of LGBT-friendly companies, that is a righteous use of the free market in order to preserve morality, marriage, family, and The American Way. But when GAY groups use or threaten the use of a boycott, THAT is homofascist intimidation, intolerance, bullying, and a "mafia-style" attempt to deny the freedom of speech. (Hello, Oregon!) Just so we're clear.


My contempt for the "conservative Christian" crowd grows more every day.
Posted by Michael-in-Norfolk at Friday, September 13, 2013