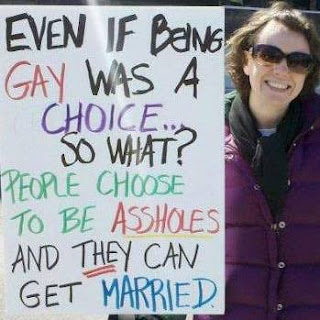 "Ex-gay" therapy exists and is promoted by the Christofascists for two primary reasons in my view.  The first and foremost is that the normalcy of homosexuality demolishes their house of cards faith system which ignorantly (and very selectively) clings to Bible passages the authorship of which tracks back to ignorant Bronze Age nomads and herders - people who were utterly ignorant in terms of scientific and/or biological knowledge.  The Christofascists like to quote a Bible passage that instructs one not to build one's house on sand, and yet that is precisely what they themselves have done by basing their belief system on a book that requires ignorance and a disregard for objective reality in the face of modern knowledge.  That homosexuality is part of God's or nature's plan and normal utterly shakes the Christofascist fragile faith construct to the core.

The second reason for the Christofascists' support of "ex-gay" therapy is that it has proven to be an effective tool to dupe the gullible into believing that sexual orientation is a "choice" and that, therefore, gays do not deserve any legal protections.  It is time that "ex-gay" therapy be thrown on the trash heap of history.  California and New Jersey have begun the process.  The process now needs to go nationwide.  Here are highlights from the New York Times supporting a ban on "ex-gay" therapy:

A discredited therapy that purports to convert homosexuals to heterosexuals was repudiated again late last month. This time, a three-judge panel of the United States Court of Appeals for the Ninth Circuit unanimously upheld a California law preventing licensed therapists from counseling minors to change their sexual orientation from gay to straight.


So-called “conversion therapy” or “reparative therapy” began at a time when professionals in medicine and psychology considered homosexuality an illness that was amenable to treatment. That ended in 1973, when homosexuality was removed from the psychiatry profession’s diagnostic manual of mental disorders. Soon all major mental health associations followed suit. A small number of therapists, however, continue to practice and advocate conversion therapy today.

The California law, which was signed by Gov. Jerry Brown in September 2012, says those practicing conversion therapy on a patient under 18 would be engaging in “unprofessional conduct” subject to discipline by state licensing authorities.


The three judges, appointed by Presidents Ronald Reagan, Bill Clinton and Barack Obama, concluded that the law did not violate the free-speech rights of therapists and minor patients or the fundamental rights of parents, because it did nothing to prevent licensed therapists from discussing the pros and cons of conversion therapy with their patients. The law regulates conduct, not speech, the panel reasoned, and lies well within the power of the state to prohibit practices it considers harmful to minors.

In June, a Christian group that was a leading proponent of conversion therapy disbanded after 37 years, and issued an apology to gays and lesbians for the harm it had caused.  The old idea that homosexuality is an illness that can be “cured” may at last be headed for the trash heap.

Posted by Michael-in-Norfolk at Sunday, September 08, 2013