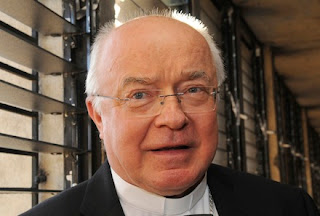 The news media - and Catholics who are eager to engage in wishful thinking that the Catholic Church is changing - have given Pope Francis the benefit of the doubt if not a free pass entirely since his elevation to the Papacy.   Sadly, nothing has changed substantively not withstanding Francis' more humble conduct and statements that have been misread to believe gays can perhaps hope for kinder treatment at the hands of the Church.  Another thing hasn't changed either: there still has been no thorough house cleaning of clergy and members of the Church hierarchy that aided, abetted, covered up, and in some instances engaged in sexual abuse of children and minors.  Bringing this reality into focus is the news that the Apostolic Nuncio to Dominican Republic (pictured above) is under investigation for sexual abuse.   The UK's Catholic Herald looks at the development.  Here are excerpts:

The Dominican Republic’s top prosecutor has said that he plans to investigate claims of sexual abuse allegedly committed by the apostolic nuncio to the Caribbean country, just a day after the Vatican confirmed its own investigation into the allegations.

Archbishop Jozef Wesolowski, appointed as nuncio in 2008, was removed from the post on August 21, and a Dominican bishop confirmed in early September that the dismissal was due to the sexual abuse scandal unfolding in the country.

Days after Archbishop Wesolowski’s removal, a television news programme aired allegations that he had paid for sex with minors and was connected to a Polish priest accused of sexually assaulting at least 14 underage boys.

The programme, “Nuria”, claimed that Archbishop Wesolowski regularly visited Santo Domingo’s historic center, where he allegedly drank alcohol and paid for sex with underage boys in an abandoned monument nearby.

Attorney General Francisco Dominguez Brito said he plans to open an investigation, although it was unclear if he had legal jurisdiction over the case since it involves a diplomatic representative.

Archbishop Wesolowski arrived in the country in January 2008 and also served as apostolic delegate to neighboring Puerto Rico. He drew praise from Cardinal Nicolas Lopez Rodriguez of Santo Domingo, who called him a “great friend and promoter of peace” as recently as last week.

The cardinal’s press office said it had no comment on the claims against Archbishop Wesolowski and that Cardinal Lopez had no immediate plans to make a statement on the situation.

The Church hierarchy remains a foul cesspool.  Catholics who continue to give deference to these horrible men are complicit in the crimes they have committed and are either utter fools or prefer to keep their heads buried in the sand rather than face the face that they have been duped by the Church.
Posted by Michael-in-Norfolk at Monday, September 09, 2013