The Lies and Ignorance of the Republican Echo Chamber 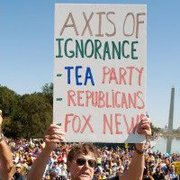 Some time back a study found that Fox News viewers were among the least informed on matters of current events and news.  Even those who rarely read a newspaper or regularly watched cable news proved to be better informed than the Fox News viewers.  As a column in the New York Times lays out, the abject level of ignorance on real data as opposed to Fox News talking points and sound bites increasingly extends all across the Republican political class.  It is frightening to realize that members of Congress are casting votes and they do not even have a clue as to the real facts.  It is a symptom of the growing embrace of ignorance that has overtaken the GOP since the rise of the Christofascists/Tea Party in the party.  Facts simply no longer matter.  Here are some column excerpts:

On Saturday, Senator John Barrasso of Wyoming delivered the weekly Republican address. He ignored Syria, presumably because his party is deeply conflicted on the issue. (For the record, so am I.) Instead, he demanded repeal of the Affordable Care Act. “The health care law,” he declared, “has proven to be unpopular, unworkable and unaffordable,” and he predicted “sticker shock” in the months ahead.

Mr. Barrasso was inadvertently illustrating the widening “wonk gap” — the G.O.P.’s near-complete lack of expertise on anything substantive. Health care is the most prominent example, but the dumbing down extends across the spectrum, from budget issues to national security to poll analysis. Remember, Mitt Romney and much of his party went into Election Day expecting victory.


About health reform: Mr. Barrasso was wrong about everything, even the “unpopular” bit, as I’ll explain in a minute. Mainly, however, he was completely missing the story on affordability.

For the truth is that the good news on costs just keeps coming in. There has been a striking slowdown in overall health costs since the Affordable Care Act was enacted, with many experts giving the law at least partial credit. And we now have a good idea what insurance premiums will be once the law goes fully into effect; a comprehensive survey by the Kaiser Family Foundation finds that on average premiums will be significantly lower than those predicted by the Congressional Budget Office when the law was passed.

But do Republican politicians know any of this? Not if they’re listening to conservative “experts,” who have been offering a steady stream of misinformation.
[T]he point is that episodes like this have become the rule, not the exception, on the right. How many Republicans know, for example, that government employment has declined, not risen, under President Obama? Certainly Senator Rand Paul was incredulous when I pointed this out to him on TV last fall. On the contrary, he insisted, “the size of growth of government is enormous under President Obama” — which was completely untrue but was presumably what his sources had told him, knowing that it was what he wanted to hear.

For that, surely, is what the wonk gap is all about. Political conservatism and serious policy analysis can coexist, and there was a time when they did. Back in the 1980s, after all, health experts at Heritage made a good-faith effort to devise a plan for universal health coverage — and what they came up with was the system now known as Obamacare.

But that was then. Modern conservatism has become a sort of cult, very much given to conspiracy theorizing when confronted with inconvenient facts.

Unfortunately, however, this runaway cult controls the House, which gives it immense destructive power — the power, for example, to wreak havoc on the economy by refusing to raise the debt ceiling. And it’s disturbing to realize that this power rests in the hands of men who, thanks to the wonk gap, quite literally have no idea what they’re doing.