America's Hypocrisy In Decrying Assad's Use of Chemical Weapons 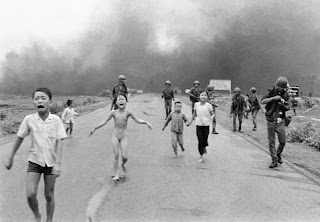 I'm by no means anti-America, but at times the hypocrisy that this country displays is shocking given some of the past actions of the national government and the U.S. Military.  Yes, the use of chemical weapons against civilians and children in Syria by most likely the Assad regime is horrible and against international laws that date back to the 1920's.  But how quickly America forgets the horrors or its own past conduct.  The image above that shows screaming children who were hit by American Napalm in Vietnam (other children were killed) is an iconic reminder that America has less than clean hands when it piously condemns the actions of others.  And when it comes to the use of poison gas, how quickly some have forgotten the USA's aid during the Iran/Iraq war during the Reagan years when America supplied chemical weapons used in the conflict.  George Will has a column that helps remind us that when one knows accurate history, America frequently doesn't live up to the standards it likes to apply to others.  Here are column excerpts:

U.S. power and security are somewhat dependent on a president’s stature, which should not be diminished unnecessarily. Neither, however, should America’s well-being be equated with a president’s policy preferences or political health. The real but limited importance of presidential prestige and the real but limited diminution of it that would result from blocking Obama’s attack both matter. But so do the manifest and manifold weaknesses of his argument.

Skepticism is warranted, given the prodigies of confusion in administration statements, including historical amnesia.

Bashar al-Assad’s use of chemical weapons is only his most recent, and he is not the first to have used such weapons in war since the 1925 Geneva Protocol proscribing them. But because attacking Syria is said to be necessary as reinforcement of the 1925 “norm,” it matters that the norm has been violated before. In the 1960s, Egypt used chemical weapons against Yemen. Saddam Hussein used them not only against disobedient Iraqis but in the 1980-88 war with Iran. A March 23, 1984, CIA report said: “Iraq has begun using nerve agents . . . [which] could have a significant impact on Iran’s human wave tactics, forcing Iran to give up that strategy.” A new article by Shane Harris and Matthew M. Aid in Foreign Policy says that in 1988:

“The United States learned through satellite imagery that Iran was about to gain a major strategic advantage by exploiting a hole in Iraqi defenses. U.S. intelligence officials conveyed the location of the Iranian troops to Iraq, fully aware that Hussein’s military would attack with chemical weapons, including sarin, a lethal nerve agent.”

U.S. officials denied acquiescing in such attacks because Iraq never announced them. But Harris and Aid quote retired Air Force Col. Rick Francona, a military attache in Baghdad during the 1988 strikes, saying, “The Iraqis never told us that they intended to use nerve gas. They didn’t have to. We already knew.”

I disagree with much of the rest of the column, but the point quoted need to not be forgotten.   Americans - especially politicians - like to forget America's many sins.  The rest of the world is less prone to such amnesia and, if Obama and America as a whole want to be believed and want to hold the moral high ground, it is important that complete and accurate history be remembered.  Too often it is not.