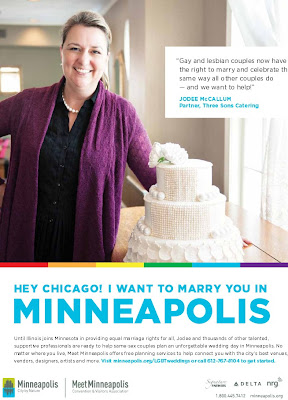 In a smart marketing move aimed at increasing gay tourism and the city's bottom line, Minneapolis has launched a marketing campaign to attract residents of currently anti-gay marriage states like Wisconsin and Illinois to make a trip to the city to get married.  While their marriages would not be recognized by their home states, those married in Minneapolis or other parts of Minnesota would enjoy a number of federal benefits.  This ad campaign has the spittle flying amongst Christofascists groups but also underscores the growing economic disadvantage of anti-gay states like Virginia.  Think Progress looks at Minneapolis' campaign and the reactions of the knuckle dragging religious zealots.  Here are highlights:

Though the fight for marriage equality is still playing out across many states, the advancement of federal benefits for legal same-sex marriages has an immediate effect for couples throughout the entire countries. Conservatives, however, don’t want families who live in states that don’t have marriage equality to access those benefits, and thus they’re trying to pretend that they don’t exist.

Minneapolis Mayor R.T. Rybak (DFL) has been reaching out to Wisconsin and Illinois same-sex couples, inviting them to travel to his city to marry now that Minnesota has marriage equality.

According to the National Organization for Marriage, however, Ryback is trying to “force same-sex marriage on neighboring states”:

Minneapolis mayor R.T. Rybak is launching an ad campaign encouraging Wisconsin same-sex couples to come to his town to ‘marry’. The campaign, which will start running in Milwaukee and Madison area publications, is already being called a shameless attempt at self-promotion, with the mayor simply using marriage to raise his own profile.


Wisconsin law is irrelevant in Minnesota, so nothing is stopping Wisconsin residents from driving across the border to legally wed. And Wisconsin law is irrelevant for many of the federal benefits that recognize place of celebration, such as immigration green cards, benefits for military servicemembers and federal employees, veterans’ benefits, Medicare nursing home benefits, and the benefits of filing taxes jointly. As Wisconsin couples married in Minneapolis access those federal benefits, the state is perfectly welcome to continue to not recognize their marriage at the state level — no “forcing” is at hand.

Surely Rybak is hoping to get some tourism business to his city from marriage equality, but he’s also got marriage licenses for any and all same-sex couples who want to come get one. And of course, if states like Illinois and Wisconsin are upset they aren’t getting the revenue from those marriage licenses, there’s an easy way to fix it so that they can.