Wentworth Miller: I Tried to Commit Suicide Before Coming Out 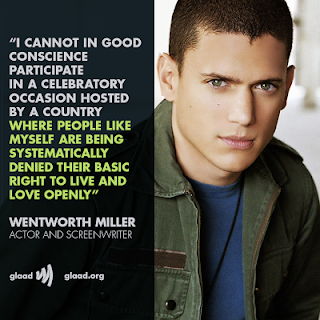 This blog began in part as a form of therapy as I struggled to come to full acceptance that I was gay and that nothing would ever change that reality - I had tried for 37 years to "pray away the gay" and NOTHING had changed in me.  Other than perhaps my level of self-hate and self-loathing.   It is a feeling that far too many of us have experienced and which people like Maggie Gallagher, the Catholic Church hierarchy and other hate merchants would have many more generations of gays experience.   All, of course, so that these foul individuals can feel morally superior or avoid facing the fact that their supposedly inerrant Bible is full of untruths.  Recently, actor Wentworth Miller came out publicly and now he has shared that like myself and many others he tried to end his own life as a teenager.  E News has details:


Wentworth Miller's road to coming out had some very dark moments.

The Prison Break star, who revealed he is gay less than a month ago, admitted that he tried to commit suicide as a teenager while struggling to come to terms with his sexuality.

Speaking out at the Human Rights Campaign gala at the Sheraton Seattle Hotel on Saturday, Miller explained that he overdosed on pills during a weekend where his parents were away from home.

"I waited until my family went away for the weekend and I was alone in the house and I swallowed a bottle of pills. I don't remember what happened over the next couple days, but I'm pretty sure come Monday morning I was on a bus back to school pretending everything was fine. And when someone asked me if that was a cry for help, I say no, because I told no one."

The actor also explained that it made him nervous to come out early in his career. "I had multiple opportunities to speak my truth, which is that I was gay, but I chose not to. I was out privately to family and friends—publicly, I was not.

"I chose to lie—when I thought about the possibility of coming out, how that might impact me and the career I worked so hard for, I was filled with fear."

Self-hate, fear and often loneliness - in addition to hate and bigotry - are the real fruits of  conservative Christianity.  Hence, my view that those who loudly proclaim their conservative beliefs are making clear tat they are not nice or decent people.
Posted by Michael-in-Norfolk at Monday, September 09, 2013