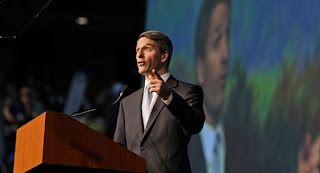 After offering a plethora of lies explanations as to why he had to date refused to return or give to charity the bribes gifts that he received from Jonnie R. Williams/Star Scientific, today GOP gubernatorial candidate finally gave a sum equal to the known amounts he received to CrossOver Healthcare Ministry, a Richmond-area operation providing medical care to the uninsured.  Not surprisingly, CrossOver Healthcare Ministry is a Christian faith-based operation, although it has a surprisingly reputable board of directors.   Politico looks at Cuccinelli's surprising too little too late donation.  The cynic in me wonders where Cuccinelli found the money to make the donation.  Here are story highlights:

Virginia‘a Republican candidate for governor, Ken Cuccinelli, announced Tuesday that he has donated $18,000 to a Richmond-based charity to offset the value of gifts he accepted from Star Scientific CEO Jonnie Williams.

His move came after Gov. Bob McDonnell, who is under federal investigation for his ties to Williams, and his family returned all the gifts and repaid $125,000 in loans to Williams in late July.


Democratic candidate Terry McAuliffe has been pressuring his opponent to follow the governor’s lead. But Cuccinelli has said that he did not receive the kind of gifts that easily can be returned and suggested that he did not have the financial wherewithal to make such a large donation on his income, which was $194,000 last year.

“I made the decision to send the check because it is the right thing to do, plain and simple,” the attorney general said in a video statement released by his campaign.

There’s a palpable sense in the commonwealth that McAuliffe has opened up a clear lead in the election, and this move seems designed to get some momentum and take away one of the top Democratic attacks.

“For those who’ve been disappointed in this situation or how I’ve handled it, I apologize,” Cuccinelli said on the video. “It’s been a humbling set of lessons for me.”

Cuccinelli expressed hope in his video announcement that he can now talk more about issues than scandal in the final eight weeks of the race.


McAuliffe’s campaign scoffed at the move.  “Cuccinelli’s pattern of ethical behavior is always the same,” spokesman Josh Schwerin said. “Get caught in scandals, do nothing for months, and then buckle to pressure for his own political reasons.”

Again, my question is this: who gave Cuccinelli the funds so that he could make the donation?
Posted by Michael-in-Norfolk at Tuesday, September 10, 2013