The Negative Effects of Evangelical Christianity in the U.S. Military 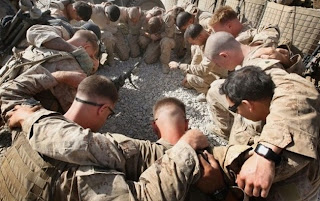 Previous posts have looked at the efforts of Christofascists within the ranks of the U. S. Military to inflict their poisonous beliefs on all and to proselytize to others - even those who want no part of what they are peddling.  Serious problems have arisen at the Air Force Academy and elsewhere, yet the Christofasicts continue to press their theocratic agenda.  The negative effects are many fold, including but not limited to the propaganda opportunities presented to jihadists and others who make use of batshit crazy and virulently anti-Muslims made by senior military officers and, of course, chaplains.  A piece in Policy Mic looks at the harm done to non-Christofascists who are forced to serve under religious extremists in the ranks.  Here are article highlights:

One of the most famous phrases regarding faith and the military is the self-assured statement that “there are no atheists in foxholes.” To anyone with a basic respect for facts, this is patently untrue. This idea is ridiculous, and were it “just a phrase,” we might leave it at that. But the underlying sentiment — that the military consists solely of believers, should be run as a Christian organization, and should seek to impose spiritual standards on its soldiers — is one of the most destructive threats to the efficacy of our military.

Evangelism is firmly entrenched in American military culture. It pervades several aspects of military life, and each of these — from the social exclusion of nonbelievers, to the influence of evangelism on access to military resources, to the toxic fusion of national security objectives with religious terminology — warrants serious consideration. For all the honor and respect we give our soldiers, we certainly don't hold some of the ideas they defend — namely, the separation of church and state — in very high regard.

Evangelicals have designated the military as a prime target for conversions. Evangelicalism wasn’t always this prevalent in the military. In fact, through World War II, religion was not a major source of contention at all. Race was the biggest issue until 1947, when the Army finally integrated. The religious pluralism found in the military at the end of WWII sustained itself, and respect for different religions ensured that no one group came to dominate the others. That changed with the progression of the Cold War.


The divisions caused by the Vietnam War fueled the evangelizing of the military. Mainline Protestant churches, which were generally opposed to military action in Vietnam, saw their representation in the military drop precipitously in the 1970s. Picking up the slack was the evangelical community, whose churches were generally in favor of the war.

These deep political divisions within American Christianity had long-lasting effects. Because evangelicals supported the war in greater numbers, they subsequently became the Army’s next generation of leaders. This shift coincided with the rise of the religious right in 1970s and ‘80s, resulting in a military that was 40% evangelical by 2005. Even more significant is the concentration of evangelicals in the chaplaincy: A full 60% of military chaplains are evangelicals.


Positions of leadership allow evangelicals to proselytize in remarkable ways. Just ask Army Specialist Jeremy Hall, who was sent home from Iraq in 2006 because the military could not protect him from Christians in our own army. Because Hall respectfully declined to join a Christian prayer before mealtime, he was ridiculed, threatened, and ostracized. He needed a bodyguard full-time to protect him from his Christian peers and superiors who could not comprehend the presence of an unbeliever in their ranks. As the Tampa Bay Times pointed out, it’s somewhat ironic that the nation spending billions to keep peace between Sunnis and Shias was unable to protect even one nonbeliever in its own ranks.

The Air Force in particular has been a hotbed of evangelical controversy. Major Warren Watties, the USAF’s 2004 Chaplain of the Year, kindly explained to new cadets that those not “born again will burn in the fires of Hell.” Additionally, cadets who declined evening chapel services were mockingly marched back to their dormitories in the "Heathen Flight." And then there’s the 2004 survey of cadets at the Air Force Academy that revealed close to half of non-Christian cadets said classmates are intolerant of those who do not "follow a religion" or "believe in a divine being."


If that's not enough, try to imagine this: Before deploying on a patrol in Iraq, your commander asks you to participate in a specifically Christian prayer. It happened to Jason Torpy, who is just one of thousands of atheists, agnostics, and humanists who are regularly reminded by their evangelical peers exactly how welcome they are.

The Officers' Christian Fellowship (OCF) represents another aspect of the evangelizing of the military: faith groups known as “parachurches” operating within our armed forces. The group’s goals are quite clear: It is the job of the OCF to “carry the gospel through the medium of ordinary relationships among the entire military community.”
This idea — that the entire institution of the military should be occupied and run by Christians — reflects the politically oriented Christian Dominionism movement. To Dominionists, the separation of church and state isn’t just a falsehood, it’s an obstacle to their goal of institutionalized evangelism.

There is more.  In addition, there are additional columns here and here.  Personally, I would like to see the chaplain corps eliminated.  The military and the government should not be spending a dime to support any faith or denomination.  Let churches and denominations build their facilities near bases and so forth, but they should no be allowed on base.

Posted by Michael-in-Norfolk at Monday, September 09, 2013