How to Save the Republican Party 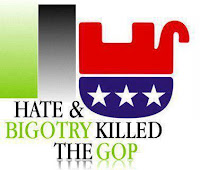 I am accused at times of bashing the Republican Party.  In truth, I want to see the GOP return to what it once was and to a time when reason, logic and social moderation were the norm as opposed to today's horrid state of the party.  If pointing out the party's faults - and those responsible for its current knuckle dragging, ignorance embracing and theocratic state - is bashing, then I plead guilty.  There's another reason for my steady criticism: for our political system to function, we cannot have one of the two major political parties locked in obstructionism and intractable extremism.  A column in the Washington Post looks at some of the things that are needed to save today's Republican Party from its unwashed base.  Here are excerpts:

Although there are more conservatives than liberals in the electorate, the GOP still needs moderate support. But the tea party’s Wahhabi-style drive to restore pure, uncompromised conservatism has led Republicans away from an electoral majority. This is especially true with young voters and minorities, although in recent years the entire country has become more tolerant and inclusive. A party dominated by hard-edged social conservatives, opponents of the DREAM Act and climate-change deniers will have a difficult time gaining a hearing.

Republicans would also do well to acknowledge that their commitment to shrinking government entails much deeper spending cuts than most Americans are willing to accept — especially in programs such as Social Security and Medicare. And they must find a way to respond to mainstream concerns about stagnant wages and widening disparities of income and wealth.

The Republicans’ demographic problem is the mirror image of the one that Democrats faced a quarter-century ago. Back then, there weren’t enough minorities to make the Democrats’ electoral strategy work; today, there aren’t enough whites to put the Republicans over the top.

And it will only get worse for them: By the middle of this century, the Census Bureau projects, whites will no longer constitute a majority of the U.S. population. A nearly all-white party, which is what the GOP has become, will have no chance of obtaining an electoral majority. Republicans will have to compete for black, Latino and Asian votes.

Incumbency can protect a party against shifts in the electorate for only so long. The Republican hold on the House is not overwhelming, and it is far from permanent. Nor is the GOP’s edge among governors. If the generational replacement taking place at the presidential level continues, it will inevitably affect Congress and the states as well.

For Republicans to design an agenda that applies to the conditions of 1980 is as if Ronald Reagan designed his agenda for conditions that existed in the Truman years.”

[T]he transformation of the Republican Party has barely begun. There’s no substitute for a leader who has the guts to break with outdated party orthodoxy . . . . As long as aspirants for GOP leadership flinch from confronting their angry base, the American people will continue to see Republicans as uncompromising, uncaring and retrograde.  And until party leaders are willing to call extremism by its rightful name, repudiating not just mean-spirited words but also narrow-minded policies, it is unlikely that any candidate will be willing to do so.

Posted by Michael-in-Norfolk at Sunday, September 08, 2013