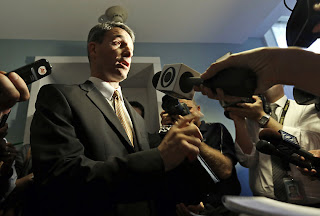 As noted in the prior post, the 2013 Virginia elections are perhaps the most important ever for LGBT Virginians.  Thus, the boyfriend and I have been doing all we can to support the Democratic ticket of Terry McAuliffe, Ralph Northam and Mark Herring.  We have been to fundraisers for all three (we are going to another one for Northam next week), we have housed a McAuliffe campaign worker and we have our yard sign already in place.  Local readers should check out my column in the September 15, 2013, edition of VEER Magazine in which I make the case as to why all forward thinking voters need to vote for McAuliffe.

The good news is that Ken Cuccinelli seems to be rightfully tanking in the polls and a sense of desperation appears to be overtaking Cuccinelli's campaign.  But, pro-equality, pro-women, and pro-minority voters cannot get complacent.  It is critical that Cuccinelli - and the rest of the Family Foundation nominated GOP slate - lose by a land slide.  Nothing short of a staggering defeat will force the Virginia GOP to come into the 21st century and kick the Christofascists to the curb where they belong.  If the GOP slate loses, there will be no opportunity to claim they lost because the ticket was not conservative enough.  And the message Virginia can send against far right extremism can reverberate all across America.

The Virginian Pilot reports on changes in Cuccinelli's campaign staff as even the insane Cuccinelli seems to realize that his campaign is sinking.  Here are highlights:

Some senior staff members working to get Ken Cuccinelli elected governor have had their roles redefined in a move that insiders say was made to reinvigorate the Republican's campaign.

The announcement at a Monday meeting in the campaign's Springfield headquarters came as Cuccinelli tries to reframe his race with Democrat Terry McAuliffe. It was also made as anxious supporters and donors take note of recent polls showing Cuccinelli trailing.

"You do not shake up a winning team," he said. "You shake up a team when its campaign seems to be losing."

Sources familiar with the Cuccinelli campaign who spoke on the condition of anonymity say things haven't reached panic mode.

"They are circling the wagons, trying to rescue the campaign," said a Republican familiar with the inner workings of Cuccinelli's operation.

Said another: "They are putting people more in charge that know him best" to improve things in the critical weeks after Labor Day.

Polling can shape perception, and the Real Clear Politics average of three polls in the past month have Cuccinelli more than 7 percentage points behind McAuliffe.

This week, the Rothenberg Political Report reclassified Virginia's gubernatorial contest as "Leans Democrat" after labeling it a "Pure Toss-up" since May.

Other distractions stemming from his work as attorney general seem more of Cuccinelli's own making because he chose to keep that job while seeking higher office. Those issues have interfered with the campaign's attempt to make the race a referendum on McAuliffe's resume as a political money man with a questionable business record, some Republicans lament.

"McAuliffe isn't looking like the devil to the business community as Democrats sometimes do," said the GOP source familiar with fundraising.

I cannot stress enough how important it is that those who want to move Virginia forward, expand equality, stop voter disenfranchisement and support women's' rights turn out vote on election day.  The Virginia GOP - and by extension, the Christofascists and Tea Party - must suffer a humiliating defeat on November 5th.
Posted by Michael-in-Norfolk at Friday, September 13, 2013