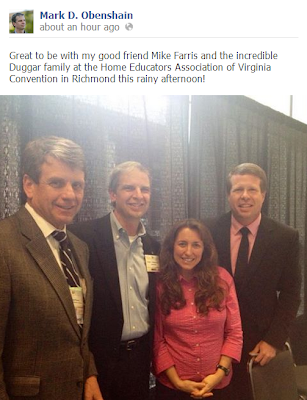 I have written a number of posts about the Virginia Attorney General race that pits the GOP nominee, extremist Mark Obenshain against Democrat nominee Mark Herring.   In my view, there's no contest in determining that Mark Herring is the far superior candidate.  Apparently, the Virginian Pilot editorial board felt the same way as it endorsed Mark Herring for Attorney General and in doing so cited some of Obenshain's extremism that I described in an editorial at LGBTQ Nation that can be found here.  As I noted in the op-ed, if one knows Obenshain's background and voting record in the Virginia General Assembly, he is every bit as extreme and – I would argue insane – as GOP gubernatorial candidate Ken Cuccinelli and GOP Lt. Governor candidate “Bishop” E. W. Jackson.  Here are highlights from the Pilot's endorsement of Herring:

The record reflects Herring is better suited for the job.

Obenshain has developed a reputation in the Senate during the past nine years as a legislator who favors ideology over the common interest. That approach has led him to support proposals that tread on shaky legal ground: granting legal rights at conception, mandating photo identification to cast a ballot and gerrymandering Senate district boundaries in an off year, for example.

Herring fought each of those measures and has increasingly established himself as a socially liberal, fiscally pragmatic voice.

Unlike Obenshain, Herring supports expansion of Medicaid and voted for the bipartisan transportation-funding package that has become Republican Gov. Bob McDonnell's crowning achievement. He has reversed his position on gay marriage, favoring repeal of the constitutional amendment that he supported in 2006 as a freshman senator. He has noted that his job, if he is elected attorney general, would require him to try in good faith to find a basis to defend the amendment's legality, a duty that he has pledged to fulfill.

Herring also supports legislative efforts to ban discrimination based on sexual orientation and opposes further restrictions on abortion. He has repeatedly suggested Obenshain is of the same mold as Attorney General Ken Cuccinelli, the Republican nominee for governor, who has championed conservative social causes and relished fighting the federal government.

[T]he contrast between the two candidates - in judgment, in legal analysis, in priorities - couldn't be clearer. Herring is the better choice to be Virginia's next attorney general.

P.S. For non-Virginians, until the nomination of the current GOP statewide slate, Mike Farris was the most extreme candidate ever nominated in Virginia.  As for the Duggars, they are a virtual baby factory and, in my opinion, more than just a little unhinged.  And Obenshain calls these nutcases his "good friends."  Need I say more?