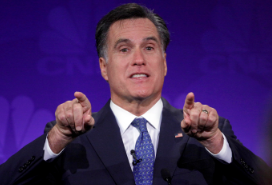 One would think that the Republicans would have learned at least a tint bit from the disasters of the Chimperator Bush/Emperor Palpatine Cheney regime budget debacle that put the nation in its current debt strapped and economic malaise condition.  Yet the budget scheme - and scheme seems the best description - aimed at duping voters suggest that no lesson was learned whatsoever.  Some have described Romney vision as George W. Bush on steroids and the description seems apt.  Hopefully, voters will see through the smoke and mirrors and understand just how unrealistic Romney's vision is in fact.  A column in the Washington Post looks at the incredibly dishonest and unworkable budget proposal.  Here are excerpts:

Start with the taxes. The Romney campaign has been very clear about what the former governor is promising: $5 trillion in tax cuts on top of extending the Bush tax cuts, with those benefits heavily weighted toward the country’s wealthiest taxpayers. Romney himself has acknowledged the lack of details, stating in reference to his tax plan that “frankly, it can’t be scored.” I have been party for many years to searches for “high-income tax shelters” that can feasibly be closed. I know of no reputable expert in either political party who would find that there is anything even approaching $5 trillion in potential revenue to be generated from this source.

Romney has also proposed a massive defense buildup, even while he says he will cut spending deeply enough to balance the budget. I think it’s clear why he won’t tell voters which cuts he would make: In the past, disclosing his planned budget cuts was politically damaging.

We have seen this movie before. When President Bill Clinton left office, our country was paying down its debt on a substantial scale. I was privileged as secretary of the Treasury to be buying back federal debt. George W. Bush campaigned on a program of tax cuts supported by economic advisers who were not subject to the rigors of official budget scorekeeping. The results — trillions of dollars of budget deficits — speak for themselves.

This is a consequential presidential election. As the country continues to recover from the largest economic crisis in generations, we need to strengthen the job market, address big fiscal challenges and build an economy that is based on sustainable, shared economic growth. Voters should have a chance to choose between clear alternatives. Obama — consistent with his obligations as president — has laid out a multiyear budget embodying his vision for the future, and it has been evaluated by independent experts. It is time for Romney to do the same.

There is more than enough blame to go around for that, and the blame falls on the greedy and unethical who were Democrat and Republican elected officials, those on Wall Street who were unethical in bundling schemes which were designed to fail and the fat cat bankers who made out like bandits.

Come on, be fair if you're going to cast blame.

Michael, a personal word to you about the robot protection words. I and many other bloggers have disabled them because they have gotten so burdensome.

I was apprehensive but disabled them several months ago and I have not had one bit of problem and my blog sites are getting more than a thousand hits per day.

Just a thought. You have to do what you think best of course.

I started using the protection words because of the near constant vitriolic hate I was finding in comments - and did I mention death threats?

I hear what you are saying and will think about it. I remain reluctant to give a platform to hate merchants, however.