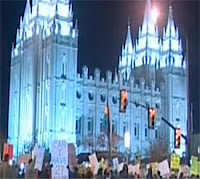 In the wake of the recent rash of gay teen suicides, one would think that even the obtuse, self-centered relics within the Mormon Church leadership might have considered staying quiet about the totally discredited change myth and choice myths about sexual orientation. One would think that mere common decency would have suggested keeping quiet. But not so - probably because once the Bible and LDS teachings on homosexuality crumble, the result is that the whole fabricated faith system peddled by the LDS and similar anti-gay religious denominations comes crashing down like a house of cards. And God forbid that folks like the LDS leadership lose their power (and, of course, money) that religion provides them. Personally, it's all pretty sickening. But then, I increasingly see religion as something pretty sickening. Yesterday, Boyd K. Packer, president of the Mormon Church’s Quorum of Twelve Apostles, repeated the discredited lies about "change" in a sermon to 20,000 fellow Kool-Aid drinkers. I suspect that Parker - like Benedict XVI, will have one huge surprise when on Judgment Day he finds he has a special place reserved for him in Hell. Here are highlights from the Salt Lake Tribune on this bullshit:
*
Same-sex attraction can be overcome and any type of union other than marriage between a man and a woman is morally wrong, an LDS apostle told millions of Mormons on Sunday.
*
“There are those today who not only tolerate but advocate voting to change laws that would legalize immorality, as if a vote would somehow alter the designs of God’s laws and nature,” Boyd K. Packer, president of the church’s Quorum of Twelve Apostles, said in a strongly worded sermon about the dangers of pornography and same-sex marriage.
*
The senior apostle drew on the church’s 1995 declaration, “The Family: A Proclamation to the World,” to support his view that the power to create offspring “is not an incidental part of the plan of happiness. It is the key — the very key.”
*
Some argue that “they were pre-set and cannot overcome what they feel are inborn tendencies toward the impure and unnatural,” he said. “Not so! Why would our Heavenly Father do that to anyone? Remember he is our father.” Alluding to the Utah-based church’s support of laws such as California’s Proposition 8 that would define marriage as exclusively between a man and a woman, Packer said, “Regardless of the opposition, we are determined to stay on course.” “We cannot change; we will not change,” the senior apostle declared.
*
In the past decade, the church has moved away from 1970s teachings that emphasized psychosocial causes of same-sex attraction, including parenting, toward a “we don’t know” approach, not denying the possibility of biological factors. Dallin H. Oaks, an apostle, said in an interview posted on the church’s website, lds.org, that LDS leaders believe some attractions can be overcome, and all can be controlled. But the authorities no longer counsel gays to marry those of the opposite sex, as a remedy for their attractions, or support all therapies meant to alter attractions,
*
Packer’s current comments could lead to more suicides among gay Mormons and to more LDS families rejecting their gay children, warned Duane Jennings, who co-directs the Salt Lake chapter of Affirmation, a support group for gay and lesbian Mormons.
*
“This is evidence that the church hasn’t really changed,” Jennings said when contacted Sunday, “and that its positive moves [like supporting Salt Lake City’s anti-discrimination statutes] have been just an attempt to improve its image in the wake of Proposition 8.”
*
Garbage like this makes me long for the day when Christianity and its poisonous off shoots are an extinct religion.
Posted by Michael-in-Norfolk at Monday, October 04, 2010