Sexual Abuse - A Question of Power, Not Sex? 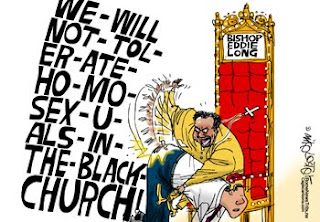 There has been all kinds of analysis of the Roman Catholic Church sex abuse scandal. A timely article in LA Progressive looks at another aspect of sex abuse often left out of the equation: that it's often a question of exerting power and control over the victim, with the sex portion being secondary. The old saying goes that power corrupts and that absolute power corrupts absolutely. Both in the Catholic Church context and that of Bishop Eddie Long as discussed in the article, the predators are "men of God" given a near absolute power over their religious flock. Thus the question is, was it about sex or using sex as an abasement and means of control over the victims? If the allegations against Long are proven true, then I suspect that he is a closet case and that it was about power AND sex. However, it was his position and misplaced deference to "men of God" that gave him the power to be a sexual predator in the first place. Ditto in respect to Catholic priests. The article is written by Thomas A. Foster, who teaches history at DePaul University, and who is the author of “Sex and the Eighteenth-Century Man: Massachusetts and the History of Sexuality in America.” Here are some article highlights:
*
[T]he conversations about homophobia in the black church or about Bishop Long’s hypocrisy confuse the issue at hand. This is not the story of a closeted gay man who simply needed sexual release. As scholars for generations have shown, sexual abuse – in all its forms – is about power, not sex. And this is true regardless of race. There is a long history, as well as current practice, of black men being sexually abused. Yet the issue is virtually ignored in the news media and in most histories.
*
Occasionally, the sexual assault of a black man does become news. In 1997 when Abner Louima, a Haitian immigrant living in Brooklyn, was sodomized with a broken broom handle by police officers, the nation paused in horror but then moved on, ignoring or even finding humor in the occurrences of sexual assault that occur daily behind bars. The sexual assault of incarcerated men, disproportionately African American, is more often a source of jokes than a mainstream concern about brutality and violation of human rights. And, sadly, it is more likely to be mentioned on a sitcom than on the nightly news.
*
The abuse of black men, of course, did not end with slavery. Perhaps the Bishop Long scandal will create an opportunity for more young black men to tell their own stories as victims of childhood sexual abuse ‹ something rarely discussed in mainstream media and too often swept under the rug by the black community.

I applaud calls for reducing homophobia in America, whether in the black church or in American society at large. Sadly, homophobia is still rampant in our country. We¹ve looked the other way while our children are tormented for exhibiting behaviors and mannerisms associated with being gay. We have made it difficult for patriotic gays and lesbians to serve in the military. We’ve asked thousands of our citizens to accept less than equality in marriage, in adoption rights, in access to federal protection from housing and employment discrimination.
*
The important characters in this sad story are the young men, not Bishop Long. When some commentators looked at the Catholic Church abuse scandals and concluded that if only priests could marry, the abuse would never have happened, they failed to see that sexual abuse was about power not sexual release. Let¹s not repeat the same mistakes with this story.
Posted by Michael-in-Norfolk at Saturday, October 09, 2010