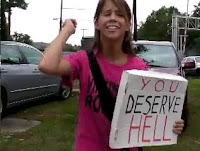 I have made it pretty clear previously that I view the Christianists constant opposition to anti-gay bullying programs as a means of (1) encouraging gay teens to commit suicide - after all, from the Christianist view, with each death there's one less godless faggot in the world - and (2) giving a green light to bigots and bullies to harass and attack LGBT students. Unfortunately, I don't know how many deaths it will take to wake the mainstream media up to this fact, not to mention our groveling and pandering politicians who lack the will to confront the religious based nature of homophobia head on. The far right continues to blame the victim in the case of gay suicide rather than face up to the true cause: the hate and bigotry that is their stock in trade. Meanwhile, the "good Christians" continue to yield the field to the hate filled extremists. Jim Burroway has a thoughtful piece at Box Turtle Bulletin. Here are some highlights:
*
Anti-gay groups like Exodus International and others routinely oppose anti-bullying programs which mention gay people, on the theory that if you don’t talk about a problem, it will no longer exist. That’s the rationale behind Focus’ opposition to anti-bullying programs that talk about gay people.
*
But of course, we know the problem exists precisely because the specific problem isn’t being addressed in schools. The problem exists because school administrators turn a blind eye to gay kids being bullied. It exists because very public people give a green light to bullying. And it exists because people create an atmosphere — administrators, teachers, parents, preachers, and ex-gay program vice-presidents — where they only speak of gay people as problems to be dealt with, struggles to be cured, “choices” to be condemned, and any notion of positive futures to be denied.
*
And the problem exists precisely because gay kids, along with gay people in general, are already being singled out for special treatment. The special treatment exists in the prohibitions and discrimination written into our laws, where we can’t marry, we can’t serve in the military, we can be fired from our jobs without cause, and in many states we cannot even claim our spouse’s corpse. And this special treatment exists beyond the law and into the hearts of those who protest that we are a threat to society, our families, our children and ourselves.
*
Against this backdrop, you can see how suicide may begin to look logical for a tormented individual. It becomes an acceptance of an open and unspoken (and yes, sometimes a spoken) invitation to just go ahead and kill yourself and be done with it. After all, if people like Focus and Exodus don’t want us to actually name the problem in schools, then the problem for these kids isn’t that there are bullies in school. The problem is that these kids are gay. And that is precisely the message that anti-gay groups would have for kids, parents, administrators, politicians and everyone else, to the exclusion of all other messages.
*
I think it is time to turn the question into a declarative: Opposition to anti-bullying programs and suicide prevention equals murder.
Posted by Michael-in-Norfolk at Sunday, October 03, 2010

I agree that there is an overwhelming condemnation of gays today especially, as equality and fairness is being sought in legislation. As a Christian, it is disturbing to see much of the Christian community encouraging such bullying when we are supposed to stand up for love and compassion for ALL people. But I want to let you and your readers know that though Christians, like myself who really do love and accept people no matter their sexuality, are few and far between, we are out there and trying to fight this hatred with you. No matter what some people may say or do, remember that you are loved and taking your life is NEVER the answer.