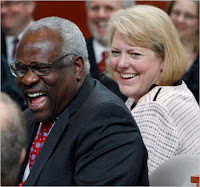 Maybe I am biased, but from my experience with judges, the worse ones for abiding by ethical mandates are the social conservatives. In my own divorce case and in a number of others, judges have ignored the Canons of Judicial Conduct and allowed gay bashing in their courts and have punished gay litigants because we offend their religious sensibilities. With a growing spot light on the activities of the wife of Supreme Court Justice Clarence Thomas, one can see where these bigoted judges may see they are getting a green light to throw the concepts of judicial impartiality, avoidance of conflicts of interest, and other judicial ethics constraints out the window. As I have noted frequently, the social conservatives feel that they are above the rules and want special rights that they would deny to everyone else. Their motto should be "It's all about me." The New York Times has a story on the increasingly brazen behavior of Virginia Thomas which suggests to me that either she needs to cease her activities or Clarence Thomas should perhaps start considering stepping down from the Supreme Court. In truth, in my opinion, given his frequently displayed religious based prejudice against those not living in accordance with his own religious beliefs, his departure would be a benefit to the entire country. Oh, and I do have two former law partners who are federal judges, so I AM familiar with who judges - and justices - and their spouses typically conduct themselves. Here are highlights from the Times:
*
[T]o some people who study judicial ethics, Mrs. Thomas’s activism is raising knotty questions, in particular about her acceptance of large, unidentified contributions for Liberty Central. She began the group in late 2009 with two gifts of $500,000 and $50,000, and because it is a 501(c)(4) nonprofit group, named for the applicable section of the federal tax code, she does not have to publicly disclose any contributors. Such tax-exempt groups are supposed to make sure that less than half of their activities are political.
*
Mrs. Thomas, known as Ginni, declined through a spokeswoman to be interviewed without an agreement not to discuss her husband. In written responses to questions, Sarah Field, Liberty Central’s chief operating officer and general counsel, said that Mrs. Thomas is paid by Liberty Central, with the compensation set by the group’s board, and that the group has “internal reviews and protections to ensure that no donor causes a conflict of interest for either Ginni or her husband.”
*
A federal law requires justices to recuse themselves in a number of circumstances where real or perceived conflicts of interest could arise, including in cases where their spouses could have a financial interest. But the decision to step aside is up to each justice; there is no appeal from the nation’s highest court.
*
“It’s shocking that you would have a Supreme Court justice sitting on a case that might implicate in a very fundamental way the interests of someone who might have contributed to his wife’s organization,” said Deborah L. Rhode, a law professor and director of the Stanford University Center on the Legal Profession.

“The fact that we can’t find that out is the first problem,” she said, adding, “And how can the public form a judgment about propriety if it doesn’t have the basic underlying facts?”
Posted by Michael-in-Norfolk at Saturday, October 09, 2010