The Ill Fruits of Religion 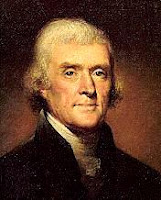 The Christianists continually endeavor to peddle the myth that the United States was founded as a "Christian nation." Of course, it's a lie like so much else these people disseminate. A comment on my Bilerico piece nicely reveals this lie with quotes of some of the Founding Fathers. The author likewise calls out Obama for his shameless pandering to this mindset:
*
Millions of innocent men, women and children, since the introduction of Christianity, have been burnt, tortured, fined and imprisoned; yet we have not advanced one inch towards uniformity. Thomas Jefferson, Notes on Virginia, 1782
*
Question with boldness even the existence of a god; because if there be one he must approve of the homage of reason more than that of blindfolded fear. Thomas Jefferson, letter to Peter Carr, August 10, 1787
*
Lighthouses are more helpful than churches. Benjamin Franklin
*
This would be the best of all possible worlds, if there were no religion in it. John Adams
*
And etc. Many American presidents took a dim view of religious bigots but Obama is not one of them. He panders to it, and that pandering clearly helps create the climate of hated that leads to murder and violence [and gay suicides].
Posted by Michael-in-Norfolk at Sunday, October 03, 2010