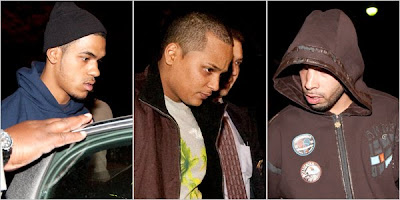 The strong anti-gay message promoted by the Catholic Church hierarchy, the Mormon Church, "family values" organizations, and, of course, the parasites of the professional Christian set - think Maggie Gallagher, Tony Perkins, James Dobson, and Victoria Cobb here in Virginia - continues to yield horrific and toxic fruits. In some ways what these groups and individuals are doing is akin to the Nazi propaganda that dehumanized Jews and paved the way for the final solution in the minds of many Germans. Once a small minority is thoroughly labeled as diseased, a threat to society, and worthy of abuse, not surprisingly there are elements in society that will feel free to inflict inhuman treatment and abuse and - in a story out of New York City where the perpetrators were young men between the ages of 16 and 23 (some are pictured above) - actual torture on members of the targeted minority. The whole phenomenon shows the utter lie of the "hate the sin, love the sinner" bullshit that emanates from the mouths of self-righteous, self-congratulatory, anti-gay bigots. The New York Times has details of the shocking story. Here are some highlights (be warned, it's very disgusting):
*
He was told there was a party at a brick house on Osborne Place, a quiet block set on a steep hill in the Bronx. He showed up last Sunday night as instructed, with plenty of cans of malt liquor. What he walked into was not a party at all, but a night of torture — he was sodomized, burned and whipped. All punishment, the police said Friday, for being gay.
*
There were nine attackers, ranging from 16 to 23 years old and calling themselves the Latin King Goonies, the police said. Before setting upon their 30-year-old victim, they had snatched up two teenage boys whom they beat, the police said — until the boys — one of whom was sodomized with a plunger — admitted to having had sex with the man.
*
The attackers forced the man to strip to his underwear and tied him to a chair, the police said. One of the teenage victims was still there, and the “Goonies” ordered him to attack the man. The teenager hit him in the face and burned him with a cigarette on his nipple and penis as the others jeered and shouted gay slurs, the police said. Then the attackers whipped the man with a chain and sodomized him with a small baseball bat.
*
The nine suspects — the group seemed not so much part of an established gang as a loose group of friends who adopted a nickname — knew some or all three victims. The idea for the attacks seemed to have been hatched last Saturday, after one member of the group saw the 30-year-old man, who he knew was gay, with a 17-year-old who wanted to join the gang, the police said.
*
Hours later, at 3:30 a.m. on Sunday, the group grabbed the 17-year-old, took him to the house and slammed him into a wall, the police said. He was beaten, made to strip naked, slashed with a box cutter, hit on the head with a can of beer and sodomized with the wooden handle of a plunger, the police said. And he was interrogated about the 30-year-old and asked if they had had sex.
*
The teenager said that they had. The gang members set him loose, warning him to keep quiet or they would hurt his friends and family.
*
[S]uspects under arrest were identified as David Rivera, 21; Nelson Falu, 18; Steven Carballo, 17; Denis Peitars, 17; Bryan Almonte, 17; and Brian Cepeda, 16. They were being held by the police in the Bronx on Friday night, with no arraignment scheduled. Still being sought, the police said, are Elmer Confessor, 23, and Ruddy Vargas-Perez, 22.
*
Great work Ms. Gallagher, et al. You foment hatred and then try to deny any involvement even though your constant anti-gay litany sends out a message encouraging violence. I'm not alone in this assessment of who is ultimately to blame for incidents like this one. Joe Sudbay similarly sums up who is ultimately responsible for such travesties:
*
There are plenty of New York City pols who espouse hatred towards the gay community, starting with State Senator Ruben Diaz, Sr., who represents the Bronx. We also routinely get castigated as evil by religious leaders from those morally bankrupt abettors of child rapists in the Catholic Church to the Mormons who lie for the lord and baptize the dead in other religions to the deeply flawed and hateful right-wing evangelicals.
*
LGBT Americans are not equal. And, apparently, that message is getting through loud and clear to bullies and other would-be gay bashers. They're translating that message into the warped idea that not equal means lesser and the LGBT community is fair game.
Posted by Michael-in-Norfolk at Saturday, October 09, 2010