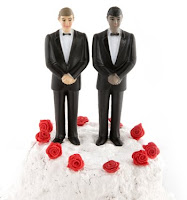 Besides his continued failure to issue a stop loss order or other executive order to end discharges under DADT, we will soon see other proof as to whether or not Barack Obama has ever meant anything he has said to LGBT Americans. The next test? Whether his Justice Department will appeal the lower federal court rulings striking down DOMA as unconstitutional. If one strips religious belief from the equation and rejects further special rights for conservative Christian belief, there is NO justification for DOMA. The evidence in these case combined with the evidence in Perry v. Schwarzenegger make it clear the anti-gay marriage laws have one purpose: to discriminate against LGBT citizens and enshrine a RELIGIOUS definition of marriage into the CIVIL laws. As a supposed constitutional expert, Obama cannot help but realize this. The question is, will he put his own anti-gay marriage beliefs aside, stop pandering to those like his BFF Rick Warren and support the U.S. Constitution. Meanwhile, Democrats want LGBT voters to go vote for them even as their party through Obama likely is preparing to throw us under the bus yet again -they must think we are utter fools. The Washington Blade looks at this issue. Here are some highlights:
*
President Obama’s commitment to repealing the Defense of Marriage Act is likely to come under enhanced scrutiny next week when the U.S. Justice Department announces its decision on whether or not it will appeal federal court rulings against the statute.
*
Legal experts across the board are expecting the administration to appeal the decisions as many LGBT advocates grumble that the defense of DOMA in court undermines Obama’s campaign pledge to advocate for same-sex couples.

Richard Socarides, a gay New York attorney and former adviser to President Clinton, said he expects the Justice Department to appeal the cases because he believes the administration hasn’t shown any signs of changing its position after defending DOMA at the district court level.
*
“I think that they’re going to continue to battle the gay rights movement in the courts,” Socarides said. “I think it continues to be one of the most unfortunate decisions of the president’s entire first two years in office and really something that is perhaps the most troubling part of these first two years of his presidency.
*
[Evan] Wolfson said the extent to which the Justice Department defends DOMA at the U.S. First Circuit Court of Appeals would be an appropriate gauge to determine the Obama administration’s commitment to supporting LGBT people.
*
“I think the Justice Department can argue they have to appeal, but they should not be trying to win at all costs, and they should urge the court to adopt a presumption of unconstitutionality for the cruel exclusion from marriage that they themselves admit is discrimination,” Wolfson said.
*
Even as many LGBT rights supporters bemoan the administration’s defense of DOMA, others say continued support for the law in court could have some advantages. Defenders of the Obama administration have said defending anti-gay laws such as DOMA sets a precedent that would prevent future administrations from allowing litigation against pro-laws to go unchallenged.
*
But Socarides scoffed at the notion that defending laws like DOMA would keep pro-gay laws safe under future administrations. “I know that a lot of people make it in defense of the administration, but to me, it’s an entirely ludicrous argument,” Socarides said. “That argument turns all logic on its head. We’re not going to defend civil rights because some day the Republicans may choose not to defend civil rights.”
*
Socarides said the Obama administration shouldn’t be considered a friend to the LGBT community for appealing the lawsuits because the president hasn’t said he’s appealing them for the purpose of having a stronger ruling.
*
I stopped defending - and believing Obama and his administration months ago. Besides being Commander-in-Chief, he's liar-in-chief, in my view. And absent action that leads to inreased equality and legal rights for all LGBT Americans nationwide from Obama, I won't be changing my opinion.
Posted by Michael-in-Norfolk at Friday, October 08, 2010