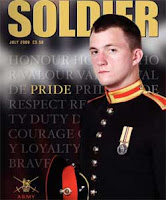 While our "fierce advocate" in the White House sits with his thumb up his ass on LGBT issues, including repeal of DADT, America's principal military ally celebrates the tenth (10th) anniversary of the end of the ban on LGBT members of the British military. The experience in the UK - and other allied nations - has proven the lie of the claims that gays in the military harm the military, yet the USA continues to cow tow to the religious bigotry of the Christofascists and Christianists within the military and turn the U.S. Constitution's guarantee of freedom of religion into one huge lie. If we had leadership in the White House, DADT would be dead and our panderer in chief would not be poised to appeal the ruling in Log Cabin Republicans v. United States. Here are highlights from Pink News on the ten year anniversary of DADT's demise in the UK (Note: the soldier on the cover is Gay Trooper James Wharton of the Household Cavalry Regiment):
*
Soldier – the magazine of the British army – has featured a gay serviceman on its cover for the first time, honouring ten years of gay and lesbian soldiers serving openly in the army. Trooper James Wharton, of the Household Cavalry Regiment, is shown wearing dress uniform complete with an Iraq medal. He appears on the cover next to the slogan 'Pride'. The magazine said it was "celebrating diversity in the British Army".
*
It represents a huge advancement in the army's policies, where just ten years ago homosexuality in the army was illegal. This was overturned in January 2000 by the European Court of Human Rights after a two-year legal battle involving three gay men and a lesbian, who had been discharged from the Royal Navy and RAF.
*
But Tpr Wharton told Soldier: "It’s 1,000 times better than ten years ago. “Obviously there are people who are set in their ways and aren’t in favour of the changed policy, but the whole attitude is different.” Wharton also challenged ideas of gay stereotypes, saying: "The idea of a 'pansy' serving in a conflict zone is a flawed one. “I would say whoever goes on a tour to a place like Iraq can’t really be described as a pansy."
*
To read the full interview with Wharton, visit soldiermagazine.co.uk
Posted by Michael-in-Norfolk at Monday, October 04, 2010