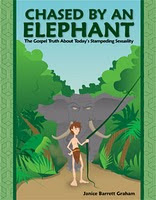 I've never been a fan of Walmart - I dislike the company's employment practices and its willingness to kiss up to homophobes. Now, there is another reason for the LGBT community to shun the mammoth retailer - it is sell an anti-gay books aimed at children. Yep, that's right. The propaganda piece is entitled "Chased by an Elephant, the Gospel Truth about Today’s Stampeding Sexuality." A wave of gay teen suicides and what does Walmart do? It peddles anti-gay propaganda authored by a Mormon with ties to and anti-gay Mormon organization called the Standard of Liberty. Gays are not the only targets of Standard of Liberty which advocates for a Christofascist theocracy. Until the folks at Walmart get their heads out of their ass, we as a community need to take our pink dollars somewhere else post haste. Here are some highlights from Q salt lake:
*
A children’s book written by the wife of anti-gay Standard of Liberty president Stephen Graham is being carried by over 100 Walmart stores. Chased by an Elephant, the Gospel Truth about Today’s Stampeding Sexuality by Janice Barrett Graham was written to “help shed the clear light of truth on today’s dark and tangled ideas about male and female, proper gender roles, the law of chastity, and the God-given sexual appetite,” according to Janice Graham in the book’s introduction.
*
The Grahams claim that their son, Andrew, successfully changed his sexual orientation and is now a happily married man. Andrew Graham wrote the book, Captain of My Soul, saying that he was “lured into same gender internet pornography during his high school years, and recruited into cursory homosexual experimentation with older men while at Brigham Young University.”
*
Andrew says he is shedding light on the “deceitful and predatory nature of the ‘gay’ lifestyle.” The book’s introduction says Andrew’s “story ends happily with his subsequent deliverance and healing through family support, expert professional counseling, truth, and repentance through the Atonement of Jesus Christ.
*
Frankly, I will be counting the days until we hear that Andrew Graham has been caught in an undercover gay sex put on by his local police department or that he's left his wife for a man. Sadly, as usual, the ex-gay proponents seem to care nothing of the straight spouses who are lured into marriages doomed to fail. Rather, it's all about making a buck and promoting religious intolerance.
Posted by Michael-in-Norfolk at Friday, October 08, 2010