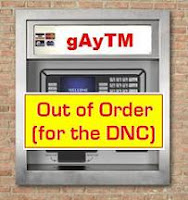 Like many other LGBT bloggers, I have largely lost faith in President Obama delivering on his campaign promises to LGBT Americans. Oh sure, every time the pressure really mounts and Obama and the Democrats worry that the LGBT ATM machine might in fact be turned off and/or LGBT voters might sit out the next cycle of elections, some new pro0Obaa rumor is launched or some nice but insignificant sop is thrown to LGBT Americans. However, when it comes to really delivering, NOTHING of substance happens. NOTHING! The latest example is the rumor being floated apparently by the White House with the assistance of HRC, one of the groups that in my view has been a principal enabler to Democrats who want LGBT money and votes but who don't have any desire to give LGBT Americans any real change. The rumor is that Don't Ask, Don't Tell will see its demise sometime next spring. Of course in the meanwhile another 360 or more honorable members of the military will have had their careers destroyed and their retirement benefits lost under Don't Ask, Don't Tell as Obama fiddles. Here are highlights from U. S. News & World Reports on the latest effort of one of Obama's sycophants:
*
By putting off campaign promises to reverse the military's "don't ask, don't tell" policy and the Defense of Marriage Act, President Obama has let some gay rights advocates down. Some of those same activists accuse Solmonese [president of HRC] of going easy on Obama to maintain his access. In a conversation with U.S. News, Solmonese explains why he still trusts Obama, why he believes "don't ask, don't tell" will be reversed next year, and why he doesn't buy the president's stated opposition to gay marriage.
*
There have certainly been some glaring moments of insensitivity. The choice of Rick Warren, the language in the administration's court briefing defending DOMA—that has been incredibly disappointing. Having said that, this administration has worked side by side with us to get the hate crimes bill on his desk. They are laying groundwork on everything from expanding the federal government's nondiscrimination policy to cover transgender employees to ending the ban on HIV-positive people coming into the country.
*
How confident are you that Obama will overturn don't ask, don't tell? I'm certain. The president has made the commitment, and people working for the president that we work with have made the commitment. I have no doubt it will be overturned.
*
So what's the holdup? The administration views this in the context of the broader issues agenda they are working with Congress on, everything from the economy and healthcare to hate crimes. They see the overturning of don't ask, don't tell along that spectrum as something that will likely happen next spring. I see a road map of six-month windows: the hate crimes bill, then the Employment Nondiscrimination Act, then don't ask, don't tell. And the administration is building a case in the military leadership and Congress and the rank-and-file members of the military.
*
How do you respond to gay activists who say you're carrying the president's water? With a community as diverse as the LGBT community, there is little one can do that isn't going to be met with criticism from somebody. A lot of that has to do with frustration of being woefully behind in securing a fundamental set of benefits and a fundamental sense of equality. But I also have a very clear road map and a plan of how this is going to get done.
*
What do you think of the tactic of some gay activists who out purportedly gay politicians who are working against gay causes? Any closeted gay person who votes against the interests of gay people and is outed because of it is getting what they deserve. My only concern is that sometimes the sensational aspect of outing somebody gets us to lose sight of just what it is that was so bad about them. And they get drummed out of office and are replaced by somebody who is just as bad.
*
Personally, Joe can blather all he wants, but I do not trust him or Obama. Action, not words is what I am waiting to see. As for HRC in general, I stopped giving money years ago - I'd rather give my hard earned money to organizations that actually get things done and that sadly excludes HRC.
Posted by Michael-in-Norfolk at Sunday, August 09, 2009